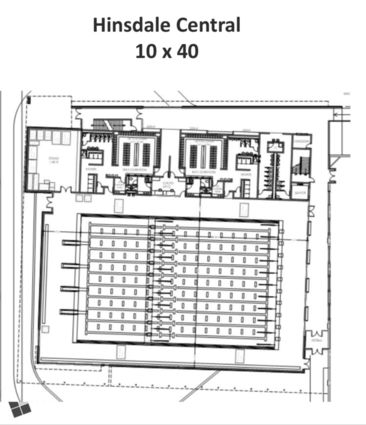 0-lane pool at Hinsdale Central into funding for the project has nearly reached its goal, according to leaders of the campaign.

A group of Central alums and district residents have been working over the last several months to raise $1.6 million to cover the cost difference between building an eight-lane and a 10-lane facility at Central. A 10-lane pool was approved by the Hinsdale High School District 86 Board in September as part of the $139 million referendum for school improvements residents approved last spring.

Its projected cost, however, is $3.5 million more than that of the six-lane pool originally planned under the referendum. Board members decided a larger pool would better serve the long-term needs of Central students, both during and after school, while providing more opportunities for community members to use it.

The fundraising group then stepped up to help bridge the gap, with the board's blessing. The offer came with a pledge from one donor to match the first $750,000 raised. A Dec. 31 post on the group's Facebook page indicated that the finish line is in sight.

"We ended the year at just under $1.5 million raised and need just over $125,000 to reach our fundraising goal of $1.6 million. All donations were raised in just a few months through word of mouth, a few ads and lots of dedication from our swimming and diving community around the globe," it reads. A subsequent post Jan. 5 simply states "Wearethisclosetoreachingourgoal."

The committee hopes to name the pool The Don Watson Aquatic Center after the man who coached boys swimming at Central from 1965-78 and led 12 consecutive teams to state titles. He also developed 167 high school All-Americans and four Olympic swimmers. Watson passed away in November 2017 at age 87.

Last week, former Central swim coach and fundraising committee member Carol Bobo said the group is "less than six figures from the goal" and expressed gratitude for the response from the community.

"The community has been wonderful, whether they were swimmers or divers or had kids at school," she said. "They've been very supportive and helping making sure that we're continuing on with all those activities and traditions."

Donors can make checks payable to the Hinsdale Central Foundation and mail them to the foundation at P.O. Box 296, Clarendon Hills, IL 60514 or use Venmo with @HCHS-Foundation as the donation address. In the event the pool is not built, all funds will be returned to donors.