Bringing growth from the grind 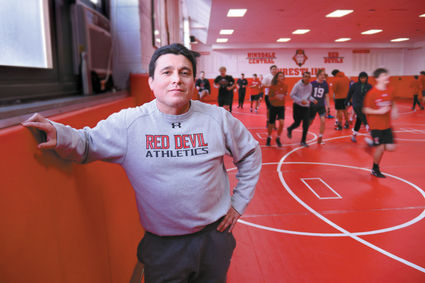 Hinsdale Central head wrestling coach Jason Hayes said the tactics he imparts are designed to have lasting application. "It's what you're teaching them for when they move onto the next journey in life," he said. "That's what's rewarding, seeing them do well at the next level."

Jason Hayes yearned to make the basketball team at his Decatur, Ind., high school as a freshman. But his skills and stature didn't quite measure up, so he was directed to another winter sport: wrestling.

"I got cut from basketball, and my PE teacher was like, 'Hey, we need a 103-pounder,' " Hayes related. "My life went in a whole different direction."

Hayes proceeded to capture state runner-up honors his senior year while leading the program to a state wrestling championship. Now in his 11th year at the helm of Hinsdale Central wrestling, Hayes aims to instill in his charges that abiding spirit of resilience and sacrifice that fostered his success - traits that will also serve them well grappling with life's challenges.

"I try to lead through having a strong work ethic to help them through the ups and downs and adversity," he said. "Everybody in the whole state practices hard from 3 to 5 p.m. What did you do outside of the (practice) room to separate yourself?"

A physical education teacher, Hayes likes to get to Central early for a workout in the fitness center. During wrestling season he holds a two-hour after-school team practice or is coaching them at a meet (along with regular weekend tournaments). He also holds a kids club for aspiring wrestlers in kindergarten through eighth grade Tuesday, Wednesday and Thursday evenings.

It's not an easygoing schedule, which is just how Hayes likes it.

"I love to work out, I love to train, I love pushing myself to the extreme," Hayes said.

That compulsion to test his mettle inspired him to walk on to the Purdue University wrestling squad as a freshman. He was rewarded with a full scholarship junior year and named team captain as a senior, making his mark in the Big 10 Conference.

"Some days you would walk in that room and you would just get your butt whooped every single day," Hayes recalled. "One day in practice I took a two-time All-American down, put him to his back. I was like, 'Whoa, I can do this. I can compete at this level'."

After graduation he served as an assistant coach at Northern Illinois University before turning his talents to the high school level.

He credits his coaches and mentors along the way for equipping him to run a wrestling program and develop student-athletes. Dave Grant at Northern taught him to maintain a practice log.

"I still keep a journal of daily practices, and I kind of gauge how the kids are performing," Hayes said. "I can tell you what we did five years ago and how the kids were wrestling. You can't train every team the same way each year because their abilities are a little different."

Each summer he takes his team to a camp at Division III wrestling powerhouse Wabash University, where Hayes' high school teammate runs the program.

"A lot of the top coaches in the country are there. Our kids get to learn from them, and they're saying a lot of the same things we're saying here," he said.

"If you're not getting your sleep, monitoring your diet, it's going to be seen in the third period," Hayes said, referencing Gable's quote above. "I tell them, 'Get comfortable being uncomfortable, because that's when you're going to win your big match.' "

Jack Allen winning the school's first state wrestling state title in 2011 is among Hayes' career highlights. As was Joe Strocchia's performance in Champaign the previous year, when he upset a top-ranked opponent in the semifinals.

"I said, 'Strocchia, you're going to beat this guy!' And he believed it. He ended up beating the guy in overtime," Hayes said, "That was a great moment."

Strocchia recalled leaping into Hayes arms after the victory as the stadium erupted. Although a senior when Hayes arrived at Central, he appreciated the way Hayes emphasized character development and enjoyment of the sport.

"The style of coaching was different. It changed toward a more transformational leadership style," Strocchia said. "Wrestlers who have never wrestled before and aren't used to such a physically demanding sport may need that element of fun. A coach like Hayes knew that."

At 43, Hayes has relinquished some of the hands-on training he would do, instead empowering his assistants to step up and hone their coaching skills.

"Each person is good at something," he said. "I think passion is what leads you to be successful."

And seeing his former wrestlers have success beyond the mat is truly rewarding.

"When someone you coached 10 years ago says, 'Thanks for everything you've done,' it's bigger than the wins and losses."