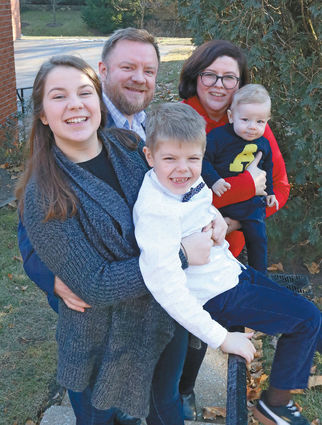 THE KORZA FAMILY KASIA AND ANDRZEJ ARE PARENTS TO ALEXANDRA, IGNACY, AND ADAM • MOVED TO HINSDALE FROM WARSAW IN JUNE • Andrzej works in it • kasia is working as a family photographer

Then in June, Kasia and Andrzej packed up baby Adam and his two older siblings (Alexandra has just finished eighth grade and Ignacy had just finished kindergarten) and left Poland to start a new life in the United States. They chose Hinsdale because it is home to Kasia's uncle and a great school system. Kasia's two sisters and her parents live nearby as well.

"We had a very nice life there, but decided to join our family," Kasia said. "They just kept asking whether we could come and join them. We decided to experience a different kind of life."

Having the support of family here made for a smooth transition, Andrzej said.

"They helped us a lot with every matter, starting from finding a place to live and taking care of the kids," he said.

The main focus when they first arrived was to enroll Ignacy in first grade at Elm School and Alexandra as a freshman at Hinsdale Central, Andrzej said.

"One of the reasons that we came here was education for our kids,' he said. "Our concern was how to provide for our kids with a good education and a better future."

He and Kasia were happy to see the kids acclimate to their new schools, Kasia said. Ignacy spoke no English when he started first grade this fall.

"Just look at him," said Alexandra when asked if she enjoys having a baby brother. "He's just so happy, and I can spend time with him after school. I can play with him and it's nice."

The family celebrated their first Christmas here by enjoying many traditions from home, with one exception. The Christmas tree was up long before Dec. 24, the date Polish families decorate their tree.

Life in Hinsdale isn't all that different than it was in

"We lived in a huge city, because Warsaw is the capital of Poland, and you would be surprised how some things are similar," she said. "We've met people with different languages and backgrounds. It wasn't that difficult as one might think."

The family is looking forward to traveling to a favorite U.S. destination, New York, to see friends over winter break.

"We love it any time of the year," Kasia said.

While some will spend the final days of 2019 looking back over the past 12 months, Kasia said she prefers not do to so. Nor does she tie her plans and dreams to the start of a new year.

"New Year's resolutions are not for me," she said.

Andrzej agrees that he prefers setting goals to making resolutions. He and his family are well on the way to achieving the one he has set for 2020.

"We would like to start a new life here, have a solid base for our lives," he said.