Partners say having a coach as a spouse poses challenges, engenders great pride 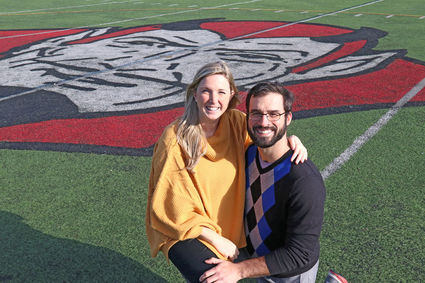 Kelly Griffin said her husband, Brian, is in his element when he's coaching the boys varsity football team. "I just know he's in the right place and me and the kids just love watching him," she said.

Evening and weekend games. Calls with recruiters. Early morning and after school practices. Emails to and from parents.

Coaching a team at Hinsdale Central High School requires a lot of hours - and a lot of dedication.

For coaches who are married and have kids, the schedule affects their families as well. The Hinsdalean talked to the spouses of three Central coaches about how the job has impacted their families.

Here are their stories.

Kelly and Brian Griffin were both new math teachers at Hinsdale Central when they first met - and hit it off immediately.

"We did start dating our first year of teaching," Kelly said. "We were pretty quiet about it, though. We were 23 and worried about professionalism, for sure, so we tried to keep it under wraps for as long as we could."

Now, 11 years later, the two have been married for seven years and are parents to three children - Logan, almost 5, Halle, 2 1/2, and Brennan, 11 months old. In addition to becoming a mom of three, Kelly took on another new role this year. She became the wife of the head varsity football coach.

Brennan was only 3 or 4 months old when it became clear Brian was being considered for the job (after the former head coach moved to another school).

"We did sit down and talk about whether this was the right time in our lives," Kelly said. "We both knew it was a dream of his. We never knew the timeline it would happen on.

"We prayed about it and knew it would be the right decision for him and our family and the school community.

Welcoming a third child was not that difficult, said Kelly, who has been working part time since her first was born. Switching to the job of head coach was.

As a former high school athlete herself, Kelly said she and Brian share the same appreciation for the difference a coach can make in a student's life.

"I think we both just recognize how important our coaches were in terms of guiding us in leadership, giving us a full picture of what it meant to be a good student and a good citizen and a good teammate," she said.

Teaching in the school where Brian coaches gives Kelly the opportunity to see his impact on student-athletes firsthand.

"I get to hear from his players just what he means to them. I've had so many parents approach me and let me know the impact Brian is having on their kids, and that's beyond football - that's them growing into good young men. I just feel proud of him," she said.

Knowing the season only lasts four or five months helps Kelly during the times she's home alone and really could use an extra set of hands. So does the way Brian interacts with the family during the off-season.

"The seven months he's with us he is just extraordinary," she said. "He is the best dad and husband you could ever imagine."

She described Friday night games as a "total blast" for the family.

"My kids, they partially watch the game, but they love the energy of the night, they love being with the students, they love thinking Dad's important," she said.

She appreciates the chance to see him in his element, too.

"I'm just proud of him and I wouldn't choose it any other way," she said.

Paul Watson was a confirmed bachelor when his mother and her friend set him up on a blind date with a woman who taught and coached at Hinsdale Central. He knew right away she was the one.

"I told my mom I met my soul mate that night - and my mom thought I was being sarcastic," he said.

He and Kelly were married three months later.

They now have two kids, 6-year-old Jack, who's in first grade, and 5-year-old Riley, a kindergartner. Paul has gone from working in outside sales to spending most of his time as a stay-at-home dad. He admits he was a little hesitant at first about how he would fit in that role.

"I'm not just a man - I'm a burly man. I'm a man's man," said Paul, who played football and threw shot put at Hinsdale South. "Now I embrace it. I love it. I have absolutely no issues with it at all. I'm proud of it."

His decision to stay home provides flexibility for the evenings and weekends when Kelly has to be at an athletic event. In addition to coaching JV tennis and Special Olympics basketball, she also is the assistant athletic director.

"This whole tennis season was a breeze because I kind of geared myself up for it," he said. "Life is about expectations, and if you expect something to happen, then you are OK with it."

"She has calendars everywhere," he said. "I'm getting alerts - which is smart, because I'm a typical man. I live day to day."

Ironically, as students at Hinsdale South and Lyons Township high schools, he and Kelly both hated Hinsdale Central, he said. Their feelings have certainly changed.

"Hinsdale Central is very good about embracing the significant others and their children," he said. "Dan Jones (athletic director) is an absolutely great guy."

And attending games is a lot of fun.

"I enjoy going to a lot of the different sporting events," he said. "I'm a big football guy. My kids love sports and they're into sports, too."

Paul said he knows Kelly truly enjoys teaching adaptive PE, coaching and working as an assistant AD, and he values the admiration and respect she has earned.

Bob and Lara Barber's "how we met" story is a classic. They both attended Hinsdale Central but didn't connect until Bob crashed Lara's reunion a decade later.

"It was my 10-year high school reunion, which he crashed because he wasn't my year but all his friends were my year," Lara explained.

The two married two years later and live in Bob's childhood home in Oak Brook with their three girls - Tessa, 14, Vija, 12, and Lilia, 10. Bob was already coaching girls swimming when the two started dating. He was named head coach of the boys program in 2015.

"I knew swimmers in high school, so I kind of knew what the schedule looked like, at least from the athlete point of view," she said. "It's basically a 90-hour week when he's in season, for all intents and purposes."

The most difficult period was when the girls were little, Lara said. But at least she always knew when he would or would not be home.

"The one thing I say to a lot of people, especially young coaches or families that have little ones, is it's completely predictable. We know he's missing the spring musical two years ahead of time. The predictability part really helps a lot," she said.

So does the eight weeks Bob has off every summer.

"I'm working and it's basically a shift change," said Lara, who is a licensed real estate broker and operations director for Compass agent Kris Berger. "He does everything for the girls - driving, cooking and then he tries to go fishing when he can, too. That's the time of year he can actually go the girls' meets because there is a lot of the age group season that he misses for obvious reasons."

The Barber girls all swim, with freshman Tessa joining the varsity team at Central this fall. All three are used to their dad's schedule, Lara said.

"Swimming is a priority for us as a choice," she explained. "It's a big deal in my house, period. We respect it. We work hard for it - whether as a professional or as an athlete." 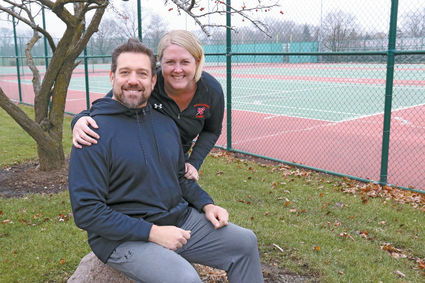 Paul Watson said he's happy to see his wife, Kelly, working as a teacher, coach and assistant AD. "Kelly's great and she's obviously a pillar at Hinsdale Central and the community," he said.

Lara said she appreciates the opportunity to watch her husband do the work he loves.

"You could be married to a world-renowned attorney and never see them do their job," she noted. "I get to be present in the moment while its happening."

Bob's work also has brought the family into a very tight-knit community.

"We've had relationships with families for years and kids for years," Lara said. "It just puts the roots in that much deeper. And with every year there are new families and new kids and that will continue.

"For us, it's more than him being a high school coach. It's being part of the community. He is so passionate about his work and he is so honored to work for such a storied program with such talent, and he never takes it for granted for one minute," she said. "We feel - to be frank - honored for him to have this kind of leadership role."