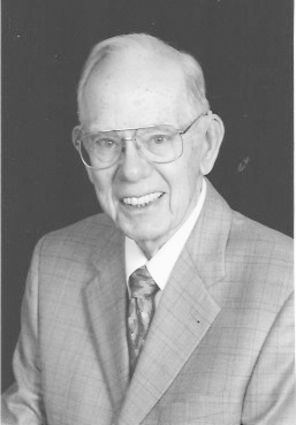 John was born at Ravenswood Hospital in Chicago in 1924. He was inducted into the army the day after he graduated from Lindbloom High School in 1942. John was a decorated World War II veteran, receiving two Purple Hearts and the Bronze Star for Meritorious Achievement in Ground Operations Against the Enemy. He landed on Omaha Beach one week after D-Day, suffered frostbite so severe he almost lost his feet and was ultimately the sole survivor of his platoon. He was then reassigned to Scotland, where, as a gifted pianist, he took advanced studies at the Royal Academy of Music. He was discharged in 1945.

John joined the American Medical Association in 1951 and spent his entire career there until his retirement in 1986. He was a frequent contributor to JAMA (100+ publications), editor-in-chief and author of AMA Drug Evaluation, director of scientific activities and director emeritus of the Division of Drugs & Technology. He was an active member of Grace Episcopal Church and the Hinsdale Golf Club.

John's family is grateful to his dedicated caregiver of six years, Anita Sabos.

John is survived by his three daughters, Janet (Jay) Tuthill, Susan (Dr. Charles) Owens and Carol (James) Marshall; his grandchildren, Jori and Jack Tuthill, David, Michael and Katherine Owens and William, Jonathan and Peter Marshall; and his two nephews, a niece and their families.

He was preceded in death by his wife, Mildred; his grandson, Thomas Marshall; and his sister, Phyllis B. Silhan.

A memorial service and Eucharist will be held at 10 a.m. Saturday, Jan. 4, at Grace Episcopal Church, 120 E. First St., Hinsdale.