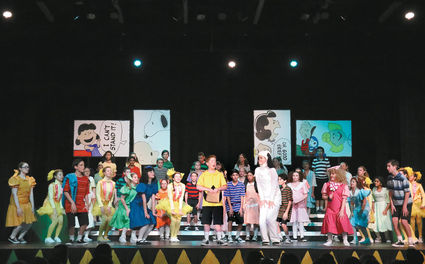 "You're a Good Man, Charlie Brown," was the first major musical to be staged in the Hinsdale Middle School cafetorium since the school opened in January. "With all the moving and arranging and getting settled and learning the new system, it's flown by," HMS teacher Ashley Sipka said of her first year in the new building. The space also serves as a lunchroom to more than 700 students every day.

The 6,650-square-foot space was home to 50 actors, 22 crew members and 300 audience members for the final performance of this year's musical, "You're a Good Man, Charlie Brown" at Hinsdale Middle School Saturday night.

Less than 48 hours later, more than 700 kids ate lunch in the same space during a two-hour period on Monday.

Such is life at the HMS cafetorium, a multipurpose room designed for day-to-day functionality and special occasions.

On a daily basis, the 5,000-square-foot cafe seats 240 students at circular tables of eight during each of the three lunch periods. That seating arrangement is quite a bit different than what students knew in the old HMS commons and required some adjustments in dining groups, Assistant Principal Rocky May said Tuesday.

"We used to have long foldable tables that accommodated eight on a side. The round tables of eight have had some social ramifications," he said. "We actually rehearsed it the whole last week before break last year."

He appreciates the natural light that fills the space and the ease with which he can monitor students, who have only one way in and one way out. And when the weather is nice, students can exit doors on the south side of the cafetorium to enjoy some fresh air.

He also noted the stage, which runs almost the entire length of the east side of the room.

"The raised stage is a nice feature in this setting," he said.

Ashley Sipka, vocal music and drama teacher at HMS and one of the directors of "Charlie Brown," agreed.

"I'd say the greatest advantage is all the black," she said. "We have a black floor, black walls, black ceiling, black curtains, so the kids pop on stage, especially when they are well-lit."

The vibrantly colored costumes for the musical really stood out, Sipka noted.

"I don't think they would have shown up nearly as well in the old commons space," she said.

The old HMS commons, an open space in the center of the school which also served double duty as lunchroom and performance space, did have one advantage the new space does not.

"It was a gem in terms of sight lines," Sipka said. "When you sat people in the commons, you could put kids every which way and they would be visible."

That's not the case with a traditional raised stage. But the new space offers many features the old one did not.

"We have the state-of-the-art lighting system, and we've honestly barely scratched the surface of what it can do. It's going to take years to figure it all out," she said.

The self-contained nature of the space - which May also mentioned - makes it a better spot for preparing a show. 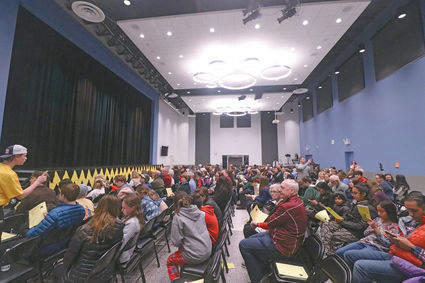 "Rehearsals on my stage are awesome. I don't have the basketball team running through after a game," Sipka said.

The stage will be used for performances again next week for the winter concert on Dec. 19, then in January for the sixth-grade musical and in March for the one-act plays.

Perhaps the most important attribute of the new stage is the response it has elicited from student actors.

"Even though we have sight line issues in the new space, the kids feel so special on our state-of-the-art stage," Sipka said. They see that gorgeous stage space ... (and) they feel like professionals.

"We may have to work a little harder to make sure they're all seen, but they sure feel good about the space."