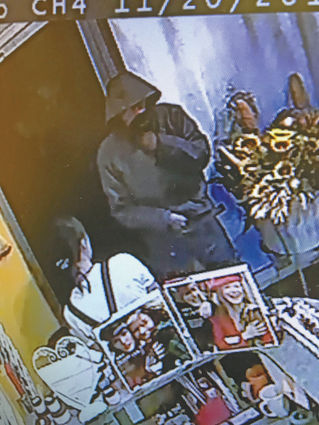 The suspect in the attempted armed robbery of Shiny Nails in Hinsdale is shown in an image from the store's surveillance camera. (photo courtesy of Hinsdale police)

A man brandishing a gun entered a Hinsdale business last week, ordering a customer and employee to lie face-down on the floor before leaving without taking anything, according to Hinsdale police and witness accounts.

Customer Heidi Wendland of Clarendon Hills had just entered the store and was standing with her back to door picking out nail polish when the suspect came in.

"I had just walked in, so I was literally the closest to him, and he literally bumped the door into me," she recounted, saying she was initially annoyed by the contact.

Salon owner Tong Sik Oh said the man told everyone to get on the floor.

"He pulled out something that looked like a gun and he demanded money," Oh said, with his son translating from Korean to English.

Oh and Wendland said the bottom half of the man's face was covered and he was wearing a hoodie.

"He started counting down from 5," Wendland said.

Oh took money out of the register and put it on the front counter. Wendland said her wallet and phone were on the counter, too.

"He didn't take it," Oh said. "We think he looked up and saw the security camera pointing at him."

"He said, 'Never mind' and just ran out the door," Wendland said, concurring with the belief the camera spooked him.

Police reported that he fled on foot from the scene and was seen heading south on foot toward 59th street before he was lost. He was described as a Hispanic male.

There were several other employees and customers in the salon at the time, and Wendland said they all ran to the back of the store once the suspect left, only to see him "casually walking down the alley." Several of them then hid in a closet for safety until police arrived.

Oh said he had never experienced an armed robbery in 10 years of business. Wendland, who has four children under the age of 6, was thankful she hadn't brought any of them with her that day. Even after the police were done with their inspections, she still felt wary.

"I made (the police) search my car. I have a big van, and I wanted to make sure nobody was in there," Wendland said. She praised Oh for staying "super calm and collected" during the ordeal.

Hinsdale Police Chief Brian King said Monday that an investigation is continuing, including studying camera footage from the store that captured the suspect's image.

Police request that anyone with information regarding the incident call the department at (630) 789-7070.