The inclusive world of Oz 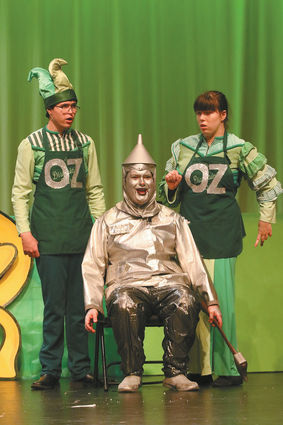 Tin Man Rob Incerto of Hinsdale rehearses a scene with castmates Terry McDermott and Kate Chepsv in preparation for the Actors with Special Needs production of "The Wizard of Oz" Friday through Sunday at Lyons Township High School's South Campus. Hinsdale's Brian Santangelo portrays the Cowardly Lion in the musical, while Hinsdale's Shannon Glenn plays Dorothy and Josh Hein of Clarendon Hills plays the Wizard. More pictures are available at https://www.thehinsdalean.com

The yellow brick road is passing through Western Springs this month, and a number of Hinsdale residents are following it to make their stage dreams come true.

At dress rehearsal this week, cast members polished their line delivery, blocking and musical numbers under the energetic guidance of veteran director Christine Rehak-Grohne. Dorothy, played by Hinsdale's Shannon Flynn in pig tails and a checkerboard apron, fantasizes of going somewhere far away.

"If happy little bluebirds fly beyond the rainbow, why or why can't I?" she sings longingly, with Judy Garland providing backing vocals.

Fellow Hinsdalean Brian Santangelo watches the scene from down on the floor, awaiting his appearance as the Cowardly Lion. He said he knew the story before taking on the role and is excited to show the evolution of his character.

"Courage!" Santangelo remarked about the Lion's aspirational quality. "It's fun."

The cast numbers 27 total, with actors coming from as far away as Riverside and Aurora. The special needs acting group seems to have few, if any, peers in the Chicago area. And it's already established quite a legacy.

"This is the 26th year," Santangelo said, prompted by parent helper and Hinsdale resident Kathryn Incerto.

And the leads aren't the village's only representatives.

"We have a lot of supporting cast from Hinsdale, too," said Incerto, who has been involved 12 years with her son, Rob. "This is probably the largest (the cast) has ever been."

Rob portrays the Tin Man, decked out in shimmery silver from head to toe with an oil can hat. He said he's long been a fan of the story.

"I saw the movie when I was a boy, and when grew up I saw it," he said. "I liked when the Scarecrow got his brain, the Lion got his courage and me, the Tin Man, got his heart."

On stage, Dorothy hurries back to her rural Kansas home before the fierce storm hits. Suddenly she finds herself in a strange land, greeted by an ethereal good witch and learning her house landed on a wicked one.

"I'm not a witch at all!" Flynn responds when asked her allegiance, joined by her "dog" Toto, played by Hinsdale's Danny Baker.

An ensemble of Munchkins advance slowly on stage, making sure the coast is clear. For many of the actors, it was a gradual progression to becoming stage performers as they overcame shyness, communication challenges

"They have a wide spectrum of disabilities: autism, down syndrome, learning disabilities," Incerto said. "They all work together really well and really develop strong bonds with each other."

She explained the actors are all students of an LT adult and community education class that began in February to prepare for the production. Students range in age from 18 to 42. They are responsible for memorizing their lines - and knowing where and when their parts begin and end. The outfits for Wizard of Oz pose some challenges, Incerto added, but families form a crack support team.

"The costume changes are quite complicated. (The actors) do a great job, but we do have a lot of parents back there working them, which is great," she said.

"The Beast. The Soldier in 'White Christmas. Simba in 'The Lion King'," he rattled off. 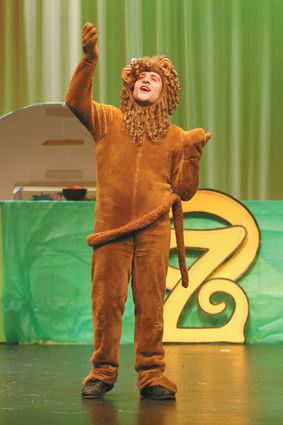 Asked if he likes to sing, Rob answers with an emphatic "Yes!"

Incerto said Actors with Special Needs offers an life-enriching experience for the actors and a community that forms lasting friendships, even some romances.

"The social interaction for all these guys, they all love it," Incerto said. "Every week they look forward to coming to the rehearsal. Sometimes it's their only social outlet.

"By being in these plays, it's just a game-changer. To get up in front of people and be able to speak and sing, you should see the smiles on the faces after they do it," she said.