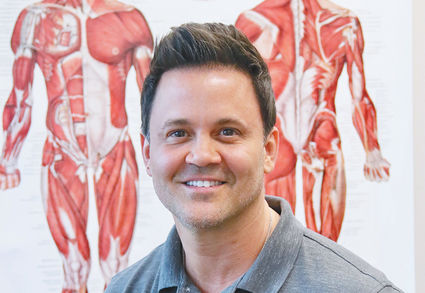 Three-time U.S. table tennis champion Eric Owens hopes to see the day when Delos Therapy, a technique created by his father, is widely used as a way to alleviate muscle tightness and pain.

Muscle stiffness doesn't show up on conventional medical imaging, but the discomfort that it causes for millions of Americans is quite real, and relief can be hard to find.

That was the experience of Kenny Owens, an athlete and electrical engineer who sought relief from hard, painful muscles. After exhausting all forms of conventional treatment, he discovered that direct pressure administered from multiple angles gave him relief.

"He approached it as an engineer," said Kenny's son, Eric Owens, who in 2012 set out to revive the method his father developed in the 1980s and share it with others throughout the Chicago area.

Owens earned a master's degree in biomedical science and spent time researching pain and inflammatory conditions before setting out to share Delos Therapy. The methods developed by his father are now offered at five Chicago area locations, including one at 230 E. Ogden Ave. in Hinsdale.

Using forearms and elbows as their only tools, Delos therapists apply direct pressure from multiple angles to relieve pain and stiffness and increase flexibility in a client's affected muscles. Twelve therapists, each with a background and knowledge of the human anatomy and a license in massage, are trained in Delos Therapy.

Owens said Delos therapists complete about 200 hours of initial instruction, which is followed by two additional phases of training.

"We go deep," Owens said. And so does the therapy itself. Owens said Delos Therapy relieves pain and stiffness that massage and stretching can't reach.

The therapy can be effective on people from toddlers to the elderly, Owens said.

"Anyone can have stiff muscles," he said.

Sessions typically last 25 to 50 minutes, depending on the muscles affected. Most people attend three sessions a week for the first four weeks before tapering off to a prescribed exercise regimen for maintenance of their relief.

Delos Therapy can be uncomfortable, Owens said. But it also is highly effective in relieving pain and restoring flexibility and range of motion.

Owens said 70 to 80 patients are seen throughout the five locations each day. As new patients seek relief through Delos Therapy, Owens travels between locations to meet with each of them.

"I spend at least an hour with every single therapist every single week," he said. They spend time discussing tough cases and the ways to best serve those who need them.

In his continued effort to offer Delos to as many people as possible, Owens and his business partner, Mimi Bosika, hope to expand to the northern suburbs and West Loop.

For now, Delos Therapy is not covered by insurance. But Owens hopes that will change as more and more people experience its benefits. He hopes one day Delos Therapy will be the first line of action in relief of muscle pain.