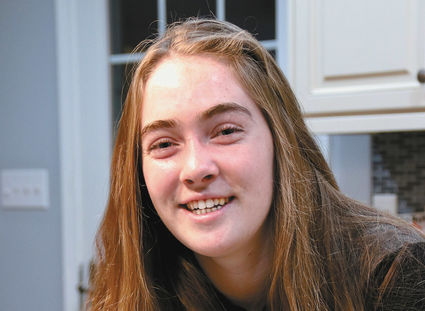 During the summer of 2016, Molly Schnieders and her dad, Rob, set off to serve with Fields of Dreams Uganda, helping at-risk children through soccer and education.

To put it mildly, the journey didn't start well.

"The plane that we were supposed to take got struck by lightning, so that delayed us a bunch of hours," said Schnieders, a Hindsale Central senior. "We missed our connecting flight from Amsterdam to Uganda, so we had to fly through Germany, Ethiopia and then Uganda. It was over two days of traveling. Our slogan was, 'Embrace the Suck.' "

Once they finally reached their destination community in the east African nation, they were the ones who were embraced.

"All the kids surrounded us. We were told, 'If you have freckles, they're going to try to touch your freckles,' so they were touching my face," she recalled with a smile.

The conditions they encountered at the local school were a far cry from DuPage County standards. More than four dozen students were crammed into classrooms not designed to accommodate them. And outside on the soccer field, kids kicked a ball fashioned from a banana leaf across a bumpy dirt field.

But Schnieders didn't pick on any sense of deprivation, just delight in welcoming the visitors. She even got a lesson in her hosts' brand of physical soccer.

"I got obliterated," she said. "I was not tough enough for it."

"We held technology workshops, trying to get teachers more acquainted with computers and projectors," Schnieders said.

It was her dad who first learned of Fields of Dream Uganda, and their firsthand exposure to the people and the need solidified their commitment. Three weeks ago, they coordinated a Dresses for Dreams Global 5K race in Waterfall Glen Forest Preserve, one of several such races held across the country and in Uganda to raise funds for the organization. She spread the word among her Central classmates and set up a marketplace featuring Ugandan goods at the race site.

The event's name stems from the fact that, originally, participants would race in dresses. That tradition hasn't stuck, but participation has continued to grow.

"We had over 100 people at the (Waterfall Glen) event," Schnieders said.

Proceeds will go toward construction of a new secondary school in the community, complete with a soccer field. Money is also going toward the purchase of "hygiene kits" for girls.

"In Uganda, if a girl's on her period, she can't go to school for that week because she's only got one pair of underwear that she can wear," Schnieders explained. "We get reusable pads for them."

Schnieders she has gained a healthy perspective from her Ugandan friends, each life a portrait in resilience.

"They say, 'I'm not just a statistic.' These kids have their own stories to tell," she said.