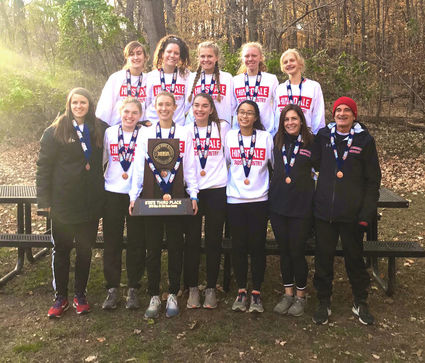 Members of the Hinsdale Central girls cross country team are all smiles after capturing the third-place trophy at the IHSA state meet on Saturday in Peoria. Senior McKenna Revord praised the performance of each of her teammates. "It feels great when everybody is there by your side and all the joy that comes from all doing well on the same day because of everyone's hard work," the three-time All-Stater said.

Hinsdale Central seniors McKenna Revord and Emma Watcke were a dynamic duo for the girls cross country team all season, leading a Devils squad that otherwise featured a number of underclassmen.

True to form, the two paced the squad to a third-place finish (183 points) at Saturday's IHSA state meet in Peoria, but it took contributions from everyone to garner the program's best finish since 2008.

Watcke, running her first and only Illinois state meet after moving last year from Ohio, said she was happy with her performance.

"I thought I went really well," she said, noting the friendly conditions helped. "It was 50 and sunny, and the course was flat and dry, so it was in good shape."

Watcke said the state final atmosphere was similar to her experience in Ohio, where she was also a standout runner.

"There were a lot of people cheering at the meet, which was cool," she said.

Revord became one of only three in the program's history to achieve All-State status three years, after making the grade her sophomore and junior years.

"It felt pretty nice to do that," she said. "I think it was best competitive race."

Revord said she felt more confident heading into this state meet due to the more rigorous training she and Watcke underwent.

"It was at a whole new level than what I have be doing in previous years," Revord related. "We upped our mileage a little bit from the past cross country season but took the necessary time to recover."

"I really worked super hard all summer and all season long," she said.

Coach Mark McCabe said Naperville North, whose 90-point performance literally ran away with the title, went in as a strong favorite, but the girls knew a podium spot was within reach.

"We thought we could run with everybody on a day that there were probably half dozen teams that could be anywhere from second through seventh," he said.

Fortunately, the Devils came in at peak form.

"Emma and McKenna really hit it out of the park," he said, noting Revord's remarkable consistency over her Central career. "What is most rewarding is you have seven girls show up and run good races when it matters the most. That's not that common."

Watcke said each member of the team stepped up.

"I was so proud of all my teammates. We all had really solid races all on the same day," she said.

Revord said a note from a friend before the meet helped focus her thoughts.

The traditional post-meet team dinner at Flat Top Grill in Peoria must have tasted especially good. On Tuesday, the team was celebrated with a parade through Central's hallways.

McCabe said cultivating a team mentality in a sport based on individual talent can be challenging. But not with this group.

"Those five couldn't be more about the team than they are, and they realize that, 'If I give myself to the team, we can be successful,' " he said. "We've been in the top five seven of the last 14 years. We're the third most successful program in the state since 2000. This was their chance to write their chapter in that legacy and carry on the tradition."