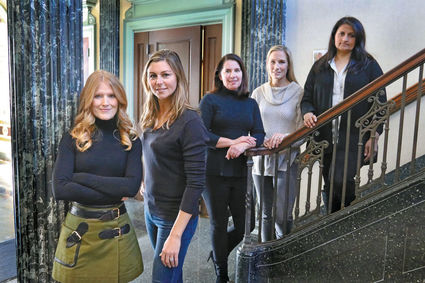 Christine Trainer, Paige Glendinning, Julie Grieve, Jill Sparks and Fariha DiPasquale of Stop 5G Hinsdale & Neighbors are working with village officials to try to slow the rollout of this new technology in Hinsdale. They have many concerns about safety, aesthetics and property values that they hope to share with other residents.

Hinsdale's Paige Glendinning is the first to admit she loves technology.

But she and other residents who are part of Stop 5G Hinsdale & Neighbors are working to stop Verizon and other carriers from bringing 5G to Hinsdale - at least until the radiation associated with the technology can be deemed safe.

"We started essentially because one of our friends had a wooden stake with the white flag in her front yard - technically the easement," said Glendinning, one of the organizers of Stop 5G Hinsdale. "I don't have one in my yard, but more I started looking around and seeing they are all over town, it was alarming."

Residents soon learned that the Small Wireless Facilities Deployment Act (Senate Bill 1451) prevents the village from prohibiting, regulating or charging for the collocation of small wireless facilities, which must be treated as permitted uses.

"I think it's shocking that a for-profit company is steamrolling their way into our village without our consent and putting something that has not been tested for biological safety all over," she said. "It's in front of our homes. It's in front of our schools."

Fellow Stop 5G organizer Christine Trainer believes raising the level of awareness is critical, as many residents she's talked with are not aware how SB 1451 has tied the village's hands.

"The most consistent response is, 'How did that happen?' " Trainer said. "How can we not have any power to say who's installing any equipment on our (village-owned) land? It's very disturbing."

She she sees a lot of misinformation about 5G as well and thinks residents need to understand the rollout is not just about new devices and faster technology.

"This is about saving our property values and saving our health and our future," he said.

In addition to restrictions imposed by SB 1451, federal law prohibits municipalities from objecting to the installation based on safety concerns, which sounds an alarm for Trainer.

"A red flag should go up not just for every resident in Hinsdale but across our state," she said. "There must be a reason why."

The only thing the village can control, Village President Tom Cauley said at the Nov. 5 village board meeting, is aesthetics. The village is working - in response to residents' concerns - to tighten the design standards trustees passed six months ago.

"We decided to go back and take another look at those standards," Cauley said at the meeting, noting that changes can be made without an official board vote. "We tried to make these design standards tighter."

As an example, the original standards did not govern placement of small wireless equipment relative to a residence. The new standards set a minimum distance of 200 feet.

"We are going to do this one pole at a time," he said. "We are just going to manage this to the hilt." Trainer, who attended the meeting with Glendinning and Fariha DiPasquale, thanked the village for its efforts. She also encouraged them to do more.

"We appreciate the revised guidelines; however, we definitely want to look at what buildings you'd be considering, and it really should be 250 feet at a minimum away from someone's home and away from schools, daycares, churches - anything that has children, because they are more susceptible to the safety hazards," she said.

She told trustees the Stop 5G Hinsdale Facebook page gained more than 750 followers in one week and almost 200 people signed a petition to stop 5G in the first two hours it was posted online, she said. The signature count had exceeded 700 a week later.

The group also is hosting an informational session on Nov. 19 at the Hinsdale Public Library.

The meeting will feature an expert on 5G, one or two speakers from the village, someone from Stop 5G and a legal expert for a presentation and question and answer session.

As of yet, no wireless carrier has applied to install 5G equipment. Once the permit application is filed, the village has 90 days to grant it, assistant village manager Brad Bloom said.

"We're of the opinion if we wait until that happens, we are really behind the eight ball," Glendinning said.

The group would like to see SB 1451 overturned so local municipalities regain local control. They'd also like to see the rollout postponed until independent tests determine whether 5G radiation is safe for humans. Trainer and Glendinning noted that if Verizon is allowed to install its equipment, AT&T and Sprint won't be far behind.

"We shouldn't have to fight so hard for safety," Glendinning said. "It's ridiculous, really."

Want to get involved?

Residents who want to learn more about 5G or get involved in protesting its arrival in Hinsdale can do the following.