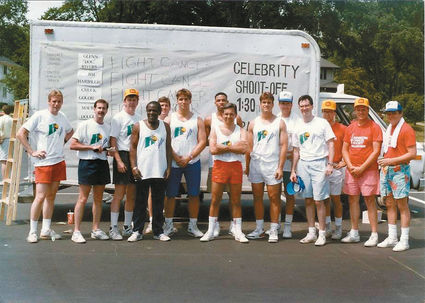 Hoop there it was - The Hoops for Life team (and few friends) took a time out to pose for this photo back in 1989. The 3-on-3 basketball tournament, which raised money for the American Cancer Society, was started by a group of Hinsdale Central grads and a few of their friends. The tourney ran for 20 years, raising more than $4.2 million. The event was the largest single day ACS fundraiser in the state for a long time. Pictured are (from left) Don Sternard, Dave McMurray, Tim Leahy, Minnie Minoso, Tom Wilson, John Shannon, Glenn "Doc" Rivers, Chuck Goudie, Jim Harbaugh, Bill Ryan, Jim Toomey, Eric Johnson, Dr. Mike Novak and Jim Walsh. (photo courtesy of Tim Leahy)