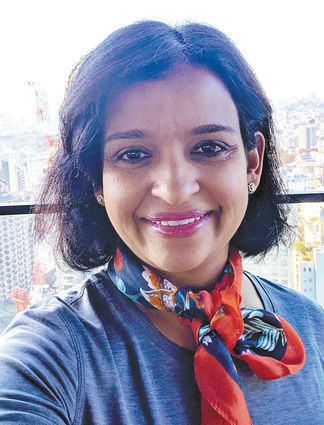 Diabetes is a disease affecting nearly 10 percent of the nation's population. But endocrinologist and Hinsdale resident Arati Reddy said early screening, advances in treatment and better education have greatly improve the prognosis for sufferers willing to take the necessary steps. (photo courtesy of AMITA Health)

What should we know about diabetes?

November is National Diabetes Month, heightening awareness of a health condition faced by 30.3 million Americans, according to the Centers for Disease Control.

Such awareness is vital for those harboring the deadly disease - one in four sufferers don't even know they have it.

"People don't feel sick or any experience high blood sugar until there is damage to the organs, to the nerves or to the heart," Reddy said. "By the time you have symptoms from diabetes, the horse is somewhat out of the barn."

In type 2 diabetes, by far the most common form, cells are resistant to the action of the hormone insulin, and the pancreas can't make enough insulin to overcome it. Consequently sugar builds up in the bloodstream instead of moving into the cells where it's needed for energy. Diabetes is the seventh leading cause of death in the U.S. and the leading cause of kidney failure, lower-limb amputations and adult blindness.

"It's distressing. Most people with it have a family history and nasty memories of a family member having complications," she commented, noting that type 2 diabetes is often hereditary.

Advances in technology have made early screening for diabetes, and prediabetes, much easier. However, the last two decades has seen the number of adults diagnosed with diabetes jump two-fold, reports the CDC. Reddy said that's partly due to more prevalent screening, but also caused by growing rate of obesity. Thankfully, one's prognosis can be greatly enhanced with better self-care.

"Because you're making enough insulin, if you improve that insulin resistance, you can go back to a state where you're not diabetic," Reddy said. "We talk about lifestyle and we talk about medicine,"

On the lifestyle front, a healthy diet and regular exercise are integral.

"Decrease the carbohydrates in the diet, which raise the blood sugar the most, and eat more fiber, protein and unsaturated fat," she advised, touting foods like Greek yogurt and apples and peanut butter to satisfy a sweet tooth.

And practice portion control. When eating out, Reddy suggested eating a third of the meal and bringing the rest home. An exercise regimen should include 140 minutes a week of any activity that gets the heart pumping.

"For the most part, it's auto-immune. There's really no cure," Reddy said, "You have to have to manage it life-long by taking insulin."

Reddy said everyone would benefit from following diabetes-sensitive practices.

"It's better to make a lifestyle change for the whole family than for one person," she said. "All of that goes a long way in promoting better choices."