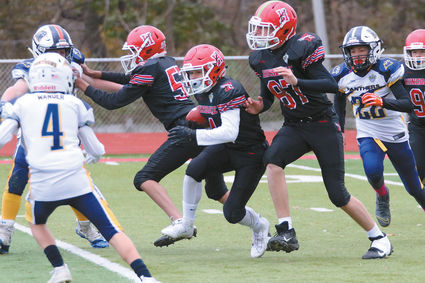 Hinsdale Falcons Varsity Red's Misha Antipov (No. 4, top left) carries the ball as Mustafa Rashid (No. 57) blocks a defender and Edward Kentra (No. 87) provides an escort en route to the team's 24-6 Super Bowl victory Saturday against the Downers Grove Panthers.

In an epic turnaround from last year, Coaches Ryan Stamer, Eric Donovan, Dan Devine and Pat Plunkett commandeered a gritty group of third- and fourth-graders to an undefeated 10-0 season and Super Bowl championship this year.

The 9U Falcons started the season with a miracle win, tying the game on the very last play against Downer's Grove, the eventual Super Bowl opponent (12-6 final score), and walking off the field as winners after an overtime victory. That exciting win marked the start of a truly fairytale season for the young Falcons.

This season's offense was led by Connor Plunkett at quarterback taking snaps from Will Stamer. Running backs included Liam McFarland, Bear Kumskis and Frankie Carbonara. Carbonara led the team in touchdowns for the season and scored both of the team's touchdowns in the Super Bowl game. The offense was made complete by Caleb Brady, Marco Guisto, Axl Holmes, Wolf Pohlenz and Nate Ruth.

The defense, which completely shut out the opponent seven out of 10 games, was led by an unstoppable line platooned by Benny Maxwell, who led the team in tackles for the season. Henry Scheri, Seamus Devine, Bryce Kinder and Brayden Buchanan completed the line. Corner contain masters included Hudson Hannah, Finnegan McInerney and Nicholas Hadden. Brady Donovan led the linebacker corps and was flanked by Alex and Will Golon plus Benjamin Buchanan at safety.

The youngest Falcons exemplified passion, toughness, and family-like teamwork that resulted in a perfect record, championship and memories that will last a lifetime.

On what turned out to be a fabulous autumn day, the Hinsdale Falcons Red team faced the Downers Grove Panthers for the Super Bowl at Mouseheart Stadium in North Aurora. Although the Falcons fumbled the kick off, Zach Kruse recovered a Panthers' fumble on the next drive. Misha Antipov ripped a 70-yard touchdown, making it 6-0 Falcons.

In the third quarter, Kruse recovered another fumble from a great strip by Skokna. Kevin Coan made a long run to the Panthers' 30-yard line, then ripped a long run for a touchdown behind excellent blocking from the offensive line of Edward Kentra, James Clark, Michael Plunkett, Mustafa Rashid and Jack Costello and tight end Braden Howe on the edge. Kruse continued his amazing game with double digit tackles. After three quarters, the score was 12-6 Falcons.

In the fourth quarter, Noah McCurry made a brilliant interception and ran to the Panthers' 8-yard line. Coan ran into the end zone to make it 18-6 Falcons. The Panthers struck with a 60-yard pass reception before Andrew Lyne intercepted their quarterback to end the threat. Another long Falcons' drive ended with a 55-yard touchdown run by Coan, helped by great downfield blocking by Lyne. The last Panthers' drive ended with another Lyne interception.

10U GOLD WILL WAIT 'TIL NEXT YEAR

The Hinsdale 10U Gold Falcons started their Super Bowl championship game versus the Wheaton Rams in their usual 2019 fashion.

Charles Calhoun made a beautiful defensive play on fourth and long to force the Rams to turn the ball over on downs, giving the Falcons the ball on first and goal at the 4-yard line. Brian O'Malley scored on a silent count quarterback sneak and then connected with Meko Zecevic for the two-point conversion. The Falcon defense played as if they were in the Wheaton huddle the entire first half, keeping the score at 8-0 at halftime.

The Rams used two pulling guards and a trick play that went 80 yards, making the score 8-6. The two-point conversion tied the score at 8-8 two minutes into the second half. Wheaton then stopped the Falcons' offense, got the ball back and scored again to make it 16-8 at the end of the third quarter.

The Falcons would not give up. Brian O'Malley called an audible, and called the reverse to Calhoun, resulting in a 40-yard touchdown to make it 16-14 in the fourth quarter. Unfortunately, his pass flew just out of Zecevic's reach for the two point conversion.

After forcing a Rams turnover on downs, the Falcons' offensive coaches then pulled out some trickery of their own, getting the ball to Calhoun, who ran 50 yards to set up first and goal at the 10-yard line with under a minute left. The Rams stopped the Falcon's last-minute push. 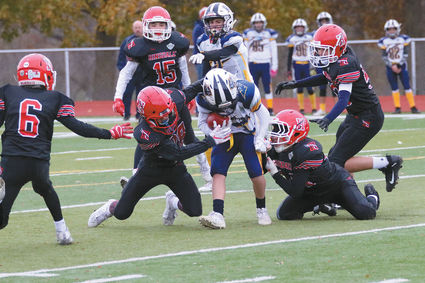 Jack Costello (left in photo above), Sammy Davino (right) and Noah McCurry (underneath) team up to bring down a Panther.

It was a tough loss in an incredible game. The players all developed throughout the season and now have their eyes set on revenge and a Super Bowl win next year.