Central teens contribute off the field 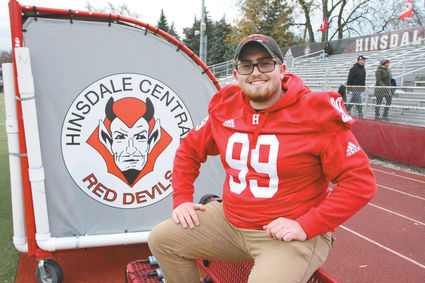 Hinsdale Central's Carl Hinchman has enjoyed his time as team manager of the varsity football team and said the game against Glenbard West - even though the Red Devils lost - was a highlight of the season. "We fought our hearts out. I thought it was the best all-around performance this season," he said.

Hinchman started playing football in third grade, and Qureshi was on the soccer field by the time he was in first grade.

Competing at the varsity level at Central wasn't in the cards for either of them, but they both found ways to stay involved in the games they love.

Hinchman played a year of Falcon Football in third grade before he was diagnosed with a brain cyst that precludes pursuing contact sports.

"I always loved football and was very excited to be able to play - and then was devastated when I learned I was no longer able to play," he said.

Years later, when it was time to start his freshman year, Hinchman reached out to the Hinsdale Central Football Club about performing a role with the team. Moms on the board connected him with coach Pat Richards, who offered him the job of team manager. Hinchman went on to manage the sophomore team and has been the varsity team manager for the past two years.

"The work progressively gets more as you get to higher levels," he said.

His responsibilities include getting pads out for practice, filming practice, preparing equipment and snacks for game day and loading the truck for away games. But everything he does is not task related. He and the three other managers also provide moral support to the players.

"Just being there, helping out wherever they need me, is probably the most important (thing I do)," he said. "I feel like us managers make it easier for the practices and the games to run more smoothly."

Being so close to a game he loves without being able to play could be tough, but Hinchman said his teammates have made it easy.

"I think the acceptance from the players has been the best," he said. "I know from the start I was worried I would always be looked at as the odd kid because I chose management instead of playing.

"It truly is a brotherhood, so it's just amazing that I have been able to grow and bond with the players. I think because of how well accepted I am as a manager that I'm not missing out too much," he added. "I'm still part of the team. I'm still out there."

Hinchman has found the experience so fulfilling that he hopes to continue in this role in college. He's reached out to the equipment managers at two universities to express his interest.

"Basically, if I choose to go to (University of) Kansas, I feel like there is a job open there," he said. "I did the same thing with Mizzou."

He said spending four years as a team manager has helped him grow as a person and has brought him satisfaction.

"It's different from just doing a typical sport and allows me to stay with the sport I love, so I was very happy," he said.

Qureshi not only loved playing soccer as a young boy, he loved watching it on TV.

"I live and breathe soccer," he said. "I'm a huge Liverpool fan and I kind of inherited the fandom from my dad. I've been to Liverpool now three times to see them, and I've seen them when they played here in America during the preseason."

Qureshi was on the freshman team at Central and had hoped to continue playing. But the competition for a spot on the team was stiff.

"I didn't make the sophomore team and I was disappointed, but Mr. Wiggins has built an incredible program at Central, and I wanted to continue to be a part of that in whatever way I could," he said.

Coach Mike Wiggins proposed Qureshi write game summaries for the program's website, a job he was happy to accept.

"I am a pretty busy guy as is, so I try to get to as many home games as I can and when I have the time on the weekend, I will travel to some of their away games," he said earlier this season. "I have a really good relationship with all the guys on the team and the coaching staff and everyone involved there.

"It's a privilege for me to go and be part of their staff and part of their games. I really am considered one of the team members," he added.

Qureshi, who spends a considerable amount of time on the Model UN team at Central, said his work with the team stands out among his high school experiences.

"I love being a part of this Hinsdale Central soccer team and that's been a real highlight of my Central year so far," he said.

Wiggins has appreciated having Qureshi as part of the team, citing his gift for asking thoughtful questions of players and coaches. 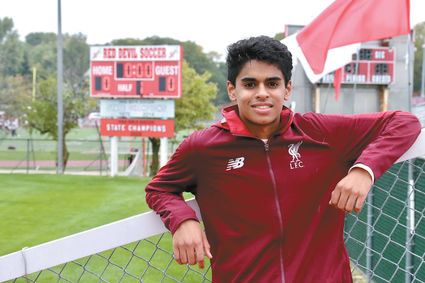 Zamaan Qureshi, sports writer for the Hinsdale Central varsity soccer team, credits his British father with his love of the game. He's happy to see the sport gaining in popularity in the U.S.

"Zamaan not only shares a passion for the game, but when he writes, he infuses perspective as a former player that really brings the reader into the game," he said. "I have enjoyed sharing with him insights from my thoughts as a coach so that he can further write an incredible piece."

Qureshi said his love of soccer perfectly compliments his passion for Model UN and interest in global affairs.

"There's this whole complex world going on and when you are watching soccer, you are in the moment," he said. "Anything that's playing on my mind, it sort of all goes away when I'm watching soccer."