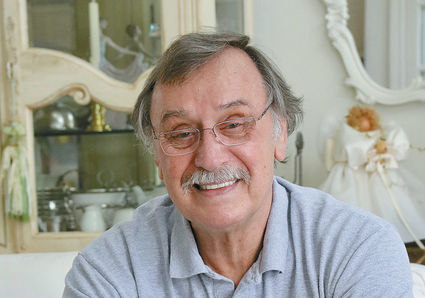 Hinsdale's Florian Dziedzic saw the photos hanging at Midway Airport Aug. 7 as he and his older brother Sylvester walked through security.

"Did you notice on the wall?" Dziedzic asked his sibling as the two Vietnam War veterans headed to the gate for their Honor Flight to Washington, D.C.

"Four pictures of you and me as civilians and in the service," Dziedzic replied, prompting Sylvester to march back for a look.

That day started at 4 a.m. as he and fellow military veterans were treated to an all-expenses-paid tour of the nation's capital, with a regiment of helpers shepherding them at every turn. This is what gratitude looks like.

He took out a manila envelope filled with letters from grateful family members, friends and local schoolkids that the veterans were given for "mail call" on the plane.

"It was amazing," Dziedzic remarked.

Having the experience with his brother made the experience even more memorable. Dziedzic was one of five brothers - from his family's three sets of twin boys - drafted right after finishing high school.

"My mom had five stars on the window," Dziedzic said. "We were all overseas. And we all came back."

Serving with the U.S. Army in Germany from 1965 to 1967. Dziedzic was a quick study on military protocol, earning him Soldier of the Month honors twice.

"They had a test out in the field, and people would come up to you and ask you questions. I answered all of them," he related.

The perks that went with the distinction were top brass.

"I had my own room, a little refrigerator and TV, and no guard duty and no Reveille for a whole month," he said with fond reminiscence. "All my buddies would knock on my door to see if I had any beer in the refrigerator."

Less enjoyable was bivouacking in frigid temps and the artillery tests in the tank he manned.

"After the first round you don't hear nothing, just ringing," Dziedzic said.

He returned to the States having risen to the rank of corporal and went into the carpentry trade. Hard work was part of Dziedzic's upbringing, working part-time in high school at his dad's bakery.

"When you work with your father, it's not easy," he quipped.

A girl he knew from his Chicago neighborhood became his wife, and he and Inez settled in Hinsdale to raise their daughter, Ariana.

The Honor Flight eventually returned to Midway at 9:30 p.m., 15 hours after it began. It was a long day for the esteemed guests. Dziedzic cherished every minute.

"The Honor Flight is something that every veteran should do," he said.