Marching to the beat of their own drums 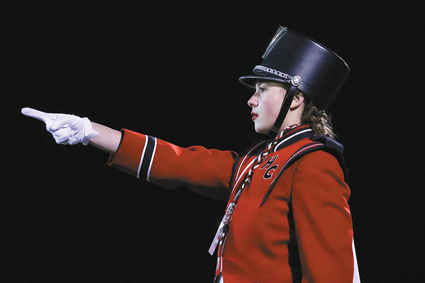 The air is crisp and the generators are loud at Hinsdale Central Marching Band practice the evening of Oct. 21.

The band is getting ready for Friday night's last regular home game of the season against Lyons Township High School.

"It's going to be cold on Friday, too, so it's just getting us ready," said Matt Kurinsky, who directs the band with Matt Goeke.

The generators - which are necessary to light the practice field - make it difficult to hear the directors' instructions, even when they're using the portable microphone.

The musicians seem unphased by the weather or the noise. The band's social chairs have planned a costume contest, so a giant Olaf, a pink dinosaur and Dr. Seuss are all playing under the direction of a drum major dressed like a hamburger.

"That might be the strongest pre-game ever," he tells them.

Next up is a run-through of "Sweet Home Chicago," the featured half-time performance, before heading inside for a quick warm up. Most of the 328 band members head home, but dozens of students who will travel to Rome over winter break stay longer to rehearse "Tonight" from "West Side Story."

They head back outside at 7:45 p.m. and while the temperature hasn't dropped, the wind has picked up and it certainly feels colder.

Goeke encourages the musicians to pay attention as they practice walking to a new formation. Working hard now will pay dividends later.

"You have 16 counts to get to these spots," he tells the students. "When we get this down and it looks good and it sounds good, then it's fun."

Band members have been on the field for almost three hours by the time practice ends at 8:30 p.m. These long Tuesday nights precede every home game for the students, who first learn the music during class.

"We try to do new music at every game and a new drill," Kurinsky said. "We try to do music that will be fun for the audience to listen to and that we enjoy playing."

He estimates it takes an average of 20 hours to prepare for each game, including class time, weekly practices and prep work the band does over the summer.

"I think one of our biggest challenges is just finding the time to put it all together," Goeke said. "The kids are so involved in so many things. They get together and they understand there is a very limited amount of time."

And the two are asking kids to do something that doesn't come naturally.

"It's challenging to play at a high level and also to be having your body do something totally different," Goeke said.

Not everyone realizes that, senior drum major Sydney Wojczynski said.

"I feel like people kind of see a bunch of people playing some pop songs and walking around the field and think, 'Oh, that isn't that complicated of a thing,' " she said. "There's a lot more behind the process than I think people realize."

A flautist since fifth grade, Wojczynski played in marching band her first three years at Central. She has enjoyed her new role.

"I love being a drum major so much," she said. "I definitely like it more than playing. It's such a cool experience to see what

Color guard captain Lillian Niemeyer enjoys the role she and her team play as well.

"I think it's having band as one big family, and then having a smaller, closer, more intimate group within it is really fun," she said.

The color guard is comprised of 26 girls and one guy - "the ladies and Lance," as they're known. They practice twice a week and then join the band at Tuesday night practices. The biggest challenge is choreographing pieces when the music doesn't lend itself to movement.

"When it comes to doing routines to music with strange tempos, that's pretty hard," she said, noting a preference for songs like "Hand Clap," which was performed at the Homecoming pep rally.

"That was really fun - much different from any other ones we've done," she said. Goeke and Kurinsky said they try to choose a variety of music, always looking for compositions that will appeal to the audience. They've selected some very American pieces for the trip to Rome - "Tonight," Aaron Copland's "Fanfare for the Common Man" and an arrangement of "Sleigh Ride."

The band travels every two years, alternating between domestic and overseas locations. The U.S. trips typically are to New York to play in the Veterans Day parade.

"With our school calendars, it's fallen at a great time and it's right at Fifth Avenue and it's broadcast here, so it feels like Macy's (Thanksgiving Day parade) but it's a little lighter," Kurinsky said.

The trip also provides an opportunity to visit Ground Zero and Ellis Island and to be exposed to professional musicians, both in clinics and on stage. 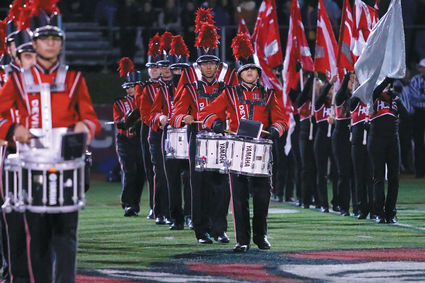 The band is open to all musicians who are interested in playing, Kurinsky said, which he sees as a real benefit to students.

"It's not to say our product isn't good, but we don't have auditions, we don't cut kids," he said. "Everybody can come and play. It's a comfortable group to be a part of. These kids end up being good friends."

"I have made some of my best friends through marching band, and I think having that sort of community has made me realize it's something I want to keep doing," she said.