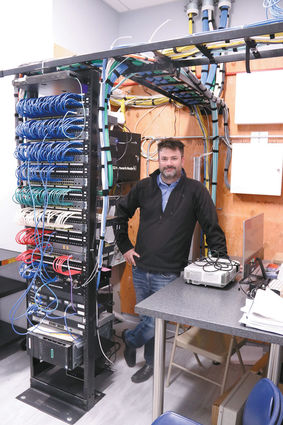 Matt Kunesh, Disrrict 181's director of techology, stands next to one of Hinsdale Middle School's six intermediate distribution frames, which connect to the main frame in the basement to provide internet to all nine district schools.

The lighting at the 10-month-old Hinsdale Middle School is state of the art — and controlled from out of state.

“There’s a guy in Texas who’s controlling it. It’s pretty wild,” remarked Mike Duggan, director of facilities for Community Consolidated Elementary District 181. “He adjusts them so they go off at a certain time or get cut to 50 percent.”

The LED lights are motion-sensored, so unoccupied rooms go dark. Oh, and they can detect sunlight, for more budget-saving benefit.

“If it’s nice and bright outside, the lights closest to the window dim down to capture the outside light,” Duggan said.

When the new school was being designed, incorporating modern processes was an integral part of the plan. From a cluster of wall-mounted TVs for digital art displays to a single computer managing all the school’s electronic systems, today’s HMS is as technologically transformed from its predecessor as it is physically altered. Matt Kunesh, the district’s director of technology, said seeing those kinds of elements materialize in the facility has been gratifying.

“It’s a lot easier being able to start from a new slate than having to retrofit an old school, especially with data cabling when you’re able to get it in before the walls and the ceilings go up,” Kunesh said.

“If you look up in the ceiling, there are miles of it,” Duggan interjected.

That collection of screens mentioned above welcome visitors in the atrium-like central hub of the school. The PiWall, as its called, was proposed by art teacher Theresa McGee, who got the idea from a colleague at an area high school.

“Her students will create different artwork, and then they get animated and displayed on this wall,” Kunesh said.

Kunesh and Duggan said architects originally drew up a trophy case for the spot. That was deemed too old school.

“That’s really not how they display art anymore. It’s more like this,” Duggan said, gesturing to it.

McGee appreciated input was solicited from teachers during the design phase for the school.

“It was nice to have (officials) support it and be able to do something that is forward-thinking and innovative,” she said. “I think it motivates the kids, having their work highlighted in the same way that some of the traditional artwork is, especially being able to show it in video format.”

In the spacious band room, a group of student musicians rehearse. Every note is being recorded, as are practice sessions in the orchestra room.

“They have A/V systems in them which they can use to record the whole class performing and have other audio control over the sound in the room,” Kunesh said.

Suspended overhead around the perimeter are what look like drapes. Acoustic curtains, Duggan noted.

“The old band room was weirdly shaped, kind of triangular, and sound bounced off everywhere,” he said of the impetus behind the curtains.

In the cafetorium, two large monitors cycle through the day’s announcements. Above, projectors show films or support stage activities on screens that are lowered from their hidden housings. Up on stage, Kunesh points out the sophisticated lighting arrays to enhance theatrical performances.

Across the hall in food and consumer science, cameras point down at the prep counter, showing the instructor’s demonstration on large screens that students can easily see from their stations.

Kunesh said the school was set up as the district’s tech nexus, with all the schools’ internet service routing through the main distribution frame in the basement. An air conditioner keeps it from overheating, and a gas generator would serve as backup should there be a power failure. That provides a level of assurance in a community with a history of outages.

“The nice thing is we’d almost never have a possibility of not having service at every building because it all comes through here,” Duggan said.

“You can do security, lighting, heat, you name it,” Duggan said of the technology. “The same system will be rolled out to all of the buildings as part of the master facility and 10-year capital projects plan over the next few years.” 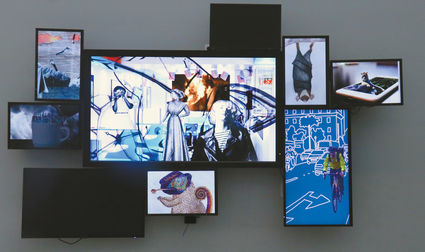 This PiWall near the school's entrance was installed as way of exhibiting student art. The display can be animated to showcase multiple works without using large display cases.

Classroom lighting can be modified by teachers right from their desk, if, for exam ple, they want dim light up front to show a video but keep it brighter in back. The Foundations classrooms for special education students were outfitted per staff recommendations.

“The lights are able to be tuned and toned because certain kids react to different levels of light,” Duggan said. “In the washroom there’s a shower and a changing table that is electronic and goes up and down.”

Additionally, he estimated the school has four times as many internal security cameras as the old HMS.

Kunesh said it’s been exciting to be on the cutting edge.

“It was pretty awesome,” he said. “It’s probably a once-in-a-career kind of thing.”