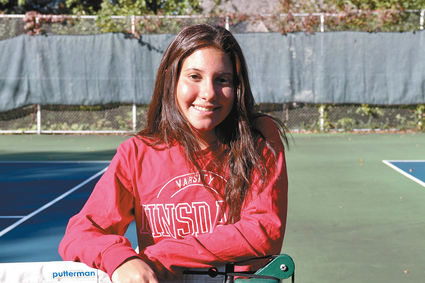 When did you start playing tennis?

I'm a very competitive person. I feel like because tennis is an individual sport, the competitiveness can really come out. I also really enjoy the people I've met over the years through tennis. I also think it's a great way to stay active and be a part of something.

What make it challenging?

Probably the fact that it's an individual sport. When you play competitive USTA tournaments, you're usually playing singles. It's just hard because you're out there on your own.

Do you prefer singles or doubles?

What is your role as a co-captain?

We really just try to do a ton of team bonding. We think that's super important. We try to keep morale up. We have a hard season this year and we're really trying to win state.

It's a great feeling because I feel like it's so nice to have that title, but also it's hard because we want to keep being defending state champs and we don't want to lose that title that we've earned. People think we're snobby and we don't earn what we do. My team works very hard. We work extremely hard.

I lived in Jordan for two years (in fifth and sixth grade) and I played on the national Jordanian tennis team.

I'm in the process of being recruited. It's a super hard and tough process. I have a few ideas of where I might go but I'm not really sure yet.

Why does coach Shawna Zsinko like having Badawi on the team?

She is the best team player I know. She will play wherever you need her in the lineup without any hesitation. She rallies positive energy for the team and makes sure everyone is having fun.