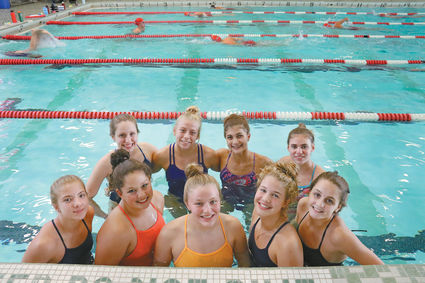 The Hinsdale Central girls swimming program welcomed 26 freshmen this season, nine of whom, pictured here, are competing on the varsity squad. They are Olivia Suliga (front row, from left), Tessa Barber, Kendall Pickering, Phoebe Paarlberg, Carrie Kramer, (back row) Kit Schneider, Laura Misiunas, Azra Ozgen and Remingtyn Bokos. Head coach Bob Barber said the youth movement is an exciting development. "When (the program) draws in this much talent that you can have nine kids on the varsity level coming out of the gates, that's very positive for the program's future," he said.

On Friday, the Hinsdale Central varsity girls swim team vanquished conference rival Lyons Township by an impressive margin of 108-78. Even more notable is the fact that a primary source of those points was the team's contingent of first-year phenoms.

Kendall Pickering won the 100-yard backstroke and took second in the 200-yard individual medley. Caroline Kramer captured top honors in the 100-yard breaststroke and finished third in the 200-yard IM. Kit Schneider bested her competition in the 100-yard freestyle and was part of three - yes, three - first-place relay teams (with Pickering on two). And Olivia Suliga and Phoebe Paarlberg came in second and fourth, respectively, in the 50-yard freestyle (see full results on Page 53).

That's just a sampling of the kind of splash the nine freshman on varsity have been making all season. Head coach Bob Barber said he hasn't seen a crop of newbies contribute to this degree in at least a decade.

"The closest I would say is 2008, when (the freshman class) came in here and started tearing up the record board, doing it throughout the entire conference," he said. "These girls kind of resemble that era."

Their arrival was not a surprise, Barber noted, with several years of standout performances in local club swimming heralding the talent tidal wave.

"We knew this one was coming, You've got individual age-group state champions in there, so they've been competing at a high level for a long time," he said.

Pickering said transitioning from club to the high school arena has deepened her appreciation for teamwork.

"Everyone supports everyone," Schneider interjected.

There were pre-existing bonds from the outset, as many of the freshmen have been on the same club teams for years. Kramer said that's made the varsity experience more special.

"Being with a group of girls makes it a lot of fun. We're all friends with each other and we cheer each other on," she said.

Fortuitously, Barber noted, the girls' individual specialties are spread across the various events, furnishing a strong and well-balanced lineup.

"We don't have a lot of overlap," Barber said. "There's definitely a level of competition among that one age group, but not beyond the two spots that are available. I don't think we go three or four deep in any event."

That translates into a lot of success in the medley relay, for example, in which each stroke is performed. But their versatility cannot be minimized: Paarlberg, Pickering, Schneider and Suliga joined upperclassmen on the Red Devils' two 200-yard freestyle relay entries at Saturday's St. Charles Invite, finishing fourth and fifth out of 26 teams.

Barber said while the transition to the high school pool has been smooth for the youngsters, adjusting to the weight training regimen has been a little choppy.

"Their dry land exposure is minimal at best," he said.

"It's no longer just work out with your friends. It's literally, 'You're an upperclassman, you're leading this freshman,' and just rotating," Barber explained. "It's been enjoyable, but it's been all new. A lot of mentoring has to happen in order to get the girls up to the level that I want to run this program at."

"It's really hard," she remarked.

"I was surprised at how hard it is, just the sets at practice. I feel like overall they're harder (than club)," she said.

Pickering admitted the high school season is mentally challenging, especially while trying to acclimate to a new school and course load.

"You're getting here at 5:30, then you have school, then you come back to swim, and you're just kind of on the same schedule every day and you have to get used to it," she said. "It's all worth it in the end, though."

Kramer said their elders tried to prepare them for both the pain and the joy.

"A bunch of my older friends would tell us how hard it is but how fun it is in the end," she related.

Going through it together has forged water-tight bonds.

"When the practices are hard, they're still fun at the same time because everyone's pushing each other through it," Pickering said.

Barber said having top-rate freshman can mean fewer opportunities for his older swimmers, but it's the nature of the sport.

"The upperclassmen have been talking about these girls for two or three years now, saying 'They're coming, and this my one year to make sectionals,' " he recounted.

And people should be talking about them for several seasons to come.

"It shows what this freshman class has to offer for the next four years," Barber said.