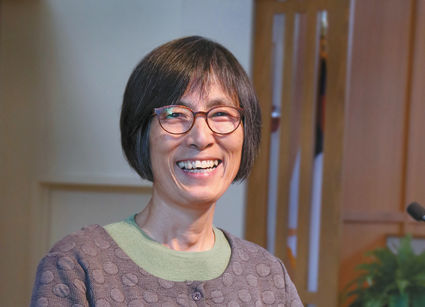 YOUNG-MEE PARK MARRIED TO REV. DR. SANG HYEON YOO • MOM TO IHWAN AND EUNHWAN • GREW UP IN KOREA • HAS A PHD IN LINGUISTICS • ENJOYS TRAVELING, HIKING AND READING

The Rev. Young-Mee Park spent the past six years as a district superintendent, telling new pastors not to change anything for six months after being assigned to a new church.

Then in July, Park was named pastor at the Hinsdale United Methodist Church, where she promptly ignored her own advice.

"I changed things my first week here," she admitted with a grin. "I debated, 'Do I change this?' But after talking to some people I decided to change a few things and I was surprised that nobody (objected). They told me, 'You do the things that you feel God is calling you to do,' " Park added.

That openness to change is one of the things Park appreciates about the flock she now leads. She also has found the congregation to be welcoming, tremendously gifted, deeply committed and hard-working.

Serving 66 churches as district superintendent was a time of tremendous learning and growing, she said, but she was happy to return to local parish ministry.

"That's the front line of God's kingdom work," she said.

Park first heard God's call when she was a teen, but she could not see His plan for her to become a minister.

"I could never think about it, one of the reasons being I had never seen a woman pastor," she said. "It never occurred to me."

Decades later, when she had almost lost hope in the church, she saw two options: abandon her faith or wrestle with her questions head-on. She decided to do the latter by enrolling in seminary and discovered an environment in which her questions were welcomed.

"Questioning itself is a part of my faith. It was truly a liberating experience to me," she said.

"It was another epiphany. Church was the place God was leading me all those years," she said.

Meeting people where they are and as they are is important to her personally and spiritually, Park said.

"I lived as a foreigner in many different places and my experiences (have been) of being a stranger and a foreigner and how often I felt on the margin of the society and ignored," she said.

Park lamented the United Methodist Church's inability to come together around LGBTQ issues and the harm done to LGBTQ brothers and sisters, their families and friends.

"Also I deplore the damage done to our capacity for witness. Jesus never said that you shall agree on all theological stances to be a family together. The only thing clear to me is that he said, 'Love God and love your neighbors.' "

Park believes the church is in a unique position to restore a lost sense of community, and she hopes her new faith community will be the hands and feet of Jesus Christ in service to others.

"Bringing people closer to each other and closer to God is so critical," she said. "And in the process, we will change the world."