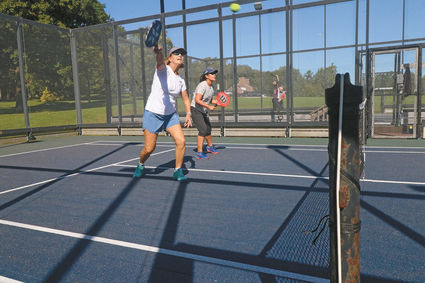 Paddle tennis pro Mary Doten (above, left) and Laura Berendt (below) led drills Monday at the courts at KLM for several players, including Sandy Wong (above). Under a new agreement, the village has handed over management of the paddle tennis program to the Hinsdale Platform Tennis Association.

Platform tennis is growing in popularity in the Chicago area.

The number of teams in the Chicago Platform Tennis Men's League has increased 27 percent over the past five years, with several nearby country clubs building courts and huts during that same time period.

Hinsdale is now poised to capitalize on that growth.

After being run for 15 years by the Village of Hinsdale, the Hinsdale Platform Tennis Association has taken over the program.

Under the new agreement, which runs through April 1, 2027, HPTA will receive a $30,000 annual subsidy from the village, including $7,500 a year to maintain facilities. The association will set aside $7,500 for maintenance as well.

The village also agreed to spend about $37,000 this year to resurface the courts the six courts at KLM and the two at Burns Field.

Prior to the new agreement, which the Hinsdale Village Board approved in April, the village had a recreation license with HPTA. The village managed facilities and HPTA ran the programs and tournaments.

Then, about four years ago, some walkways to the courts at KLM collapsed, creating an unexpected $80,000 expense for the village.

"That was an immediate, urgent need to repair those so the courts were usable," said Alice Waverley, chairman of the village's parks and recreation commission.

That prompted an examination of how the village and the association were working together.

Representatives from the two sides spent about three years negotiating the current agreement.

"Where we are today, 2 1/2 years ago when we were talking, this concept wasn't even on the table," Brennan said. "We had a lot of people who cared about doing the right thing, and it led to some really good discussions and it led to a constant evaluation of what we were trying to accomplish."

Waverley said the program will benefit from the association's management.

"We really wanted somebody else to run this who really was much closer to it," she said. "These guys are not only paddle enthusiasts, they really are paddle experts. For the village, this was one of many things on our plate, and we weren't experts at it."

For the first time this season, HPTA members will register for leagues, sign up for lessons and reserve courts through the association's website at https://www.hinsdalepaddle.com.

After the season ends in April, HPTA plans to break ground to expand and renovate the paddle tennis hut at KLM.

The village will contribute $40,000 toward the project and will finance up to $400,000 in an interest-free seven-year note.

"When the hut was built 15 years ago, the definition of what a paddle hut was very different than what it is today," Brennan said, noting that its primary purpose then was to provide a place for members to stay warm.

The expanded hut will provide more space for members to socialize, expanded storage areas and an office for paddle tennis pro Mary Doten.

"We're going to be able to be better hosts for league events, for tournaments. It's going to feel more like the modern huts that have been built here locally," Brennan said.

Members also will be able rent the hut for private events.

"You can have an event there for anywhere from 20 to 40 people. Everybody will have a chance to play," Brennan said.

The new hut will be named the Bill O'Brien Platform Tennis Center, or the "Billy O" for short.

"He is the founding father of paddle in this part of Chicago," Brennan said of the hut's namesake.

"(Hinsdale's program) never would have gotten off the ground if it wasn't for Bill's leadership."

The association also will change its name to The Hinsdale Paddle Club.

"We want it to feel for our members more like it's a club, it's a community, and we're doing things to involve them," Brennan said. "That name change was intentional because we want it to feel that way."

Hinsdale residents interested in membership will received preferred rates of $300 for families and $250 for individuals, compared to $450 and $375 for nonresidents.

Membership allows players to compete in leagues, reserve courts and reserve the hut. But residents don't have to be a member to play on the courts.

"They're public courts and they will always be public courts," Brennan said. "We're not looking to privatize the courts in any way."

That said, the courts are among the busiest in the Chicago area, he noted. On weekday evenings and weekends, courts are likely to be booked by members or reserved for tournament play.

"That's why I encourage even someone who is causally interested to become a member," Brennan said. 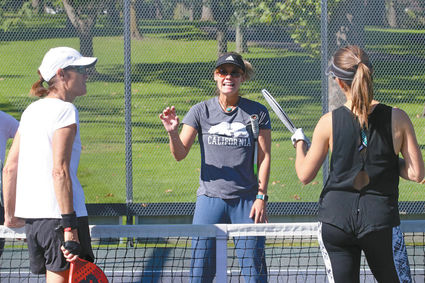 "Most everybody who tries it walks off the court and says, 'Boy, that was fun,' " Brennan said.

Waverley, a former tennis player at Notre Dame, has been playing paddle tennis since 2010.

"It's an easy sport, if you have tennis skills, to transition those to paddle," she said.

The Panama native said the sport helps her survive the cold winters here.

"I'm thrilled both on a player's side and as chair of the parks and rec on the village side that this is positive for us as well," Waverley said.