Get fired up - for safety 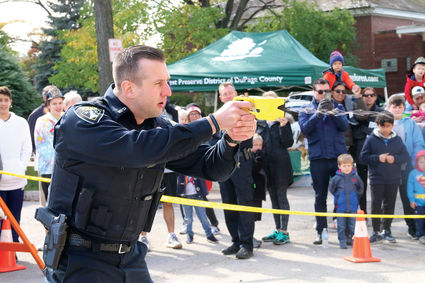 Visitors to last year's Hinsdale Fire and Police Open House saw a demonstration of a Taser, while girls practiced using fire extinguishers to put out a fire. This year's open house, from 11 a.m. to 3 p.m. Saturday at the fire and police stations, will show families the tools and techniques used by department personnel as part of National Fire Prevention Week. (file photos)

Since 1922, the National Fire Prevention Association has sponsored week, which is timed to commemorate of the Great Chicago Fire, which began on Oct. 8, 1871. The conflagration killed more than 250 people, left 100,000 homeless, destroyed more than 17,400 structures and burned more than 2,000 acres of land.

To help children, adults and teachers learn how to stay safe in the event of a fire, firefighters in communities around the country provide lifesaving public education in an effort to drastically decrease casualties caused by fires. The Hinsdale Fire Department is holding events this weekend to inform and benefit citizens of all ages in the area of fire safety.

At about 7 p.m. tomorrow, Oct. 11, the 25th annual Silent Parade will depart from the Hinsdale fire station, 121 Symonds Drive. The procession, honoring all fallen firefighters in the line of duty as well as any civilian who has perished in a fire, will travel west along Chicago Avenue through Clarendon Hills, Westmont, Downers Grove and end at Trinity Lutheran Church, 1101 Kimberly Way, Lisle. The night will conclude with a memorial service and tribute to firefighters at the church.

Residents are encouraged to line the streets with American flags and flashlights to pay their respects and express their gratitude for first responders, firefighters and emergency medical services personnel.

Chief John Giannelli said the parade is especially poignant for his department, as many worked alongside Deputy Chief Mark Johnson, who suffered a heart attack in the fire station while on duty in 2010. The village's other firefighter lost in the line of duty is Walter Flemming, who died while fighting a structure fire in 1946.

"We usually do a 'Missing Man' setup in front of the station to represent the fallen," Giannelli said. "That brings it closest to home when it happens to your department."

While structure fires are not as common today, village crews did responded to six fire calls in August, either in town or through mutual aid, according to the department's monthly report. But firefighter/paramedics respond to all types of emergencies, including traffic accidents, gas leaks and medical incidents at homes.

Get a full sense of all the village's first responders do at the police and fire department's annual open house from 11 a.m. to 3 p.m. Saturday, Oct. 12, at the fire and police stations. Join police officers and firefighters for an array of activities to educate and engage the whole family, including firefighting equipment demonstrations, the fire safety trailer and a simulated live burn to demonstrate the advantages of a residential sprinkler system.

Giannelli said the theme for this year's Open House is "Not every hero wears a cape. Plan and practice your escape," recognizing the everyday people who motivate their households to develop and practice a home fire escape plan. These seemingly basic behaviors can have life-saving impact.

Younger attendees will have the chance to see what it's like to work for the fire department.

"We'll have the Kids Firefighter Challenge, where they put on gear and try and carry a hose, go through windows, force open doors and do search and rescue," he said.

"It's important to make sure you have working smoke alarms on every level of your house," he said. "Families should also create and practice a home escape plan. There should be two ways out of every room, and designate a tree or light pole a safe distance away as the meeting spot." 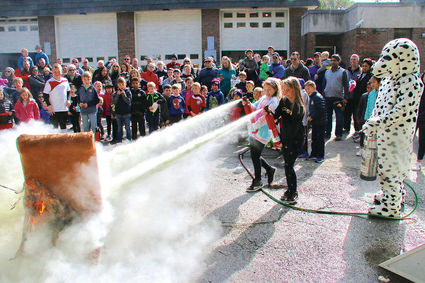 Police activities at the open house include a SWAT team demonstration, crime prevention programming, information on community notification tools. A drone and K-9 unit will be on hand and police department tours also will be conducted.

Giannelli encouraged residents to stop by for a fire department tour at any time.

"Anybody who would like to come by and visit, we love to give tours," he said.