Construction has continued into autumn 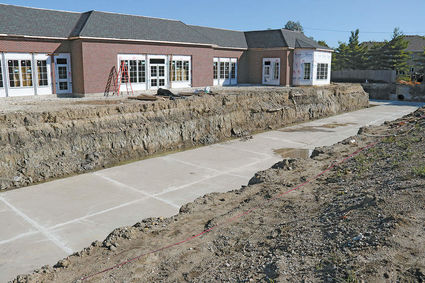 The concrete pad was poured this week to hold the stormwater trap as part of the North Madison flood mitigation project. The trap, or vault, located just just south of the site of the new Kensington School, will retain water diverted from Madison Street near Ogden Avenue, which has been prone to flooding during heavy rains.

Summer's high season of infrastructure upgrades may be over, but several projects continue around the village.

On the north side of town, the work to alleviate flooding is progressing, according to village engineer Dan Deeter.

Madison Street near Ogden Avenue was closed for a few weeks last month as crews installed pipes to eventually connect with a stormwater vault, or trap, to be installed as part of the construction of Kensington School at Ogden and Monroe Street.

"They have poured the concrete for the pad that the vault will sit on," Deeter said. "They've got to make sure that the concrete cures. Generally it takes at least five days."

Deeter described the way the pieces of the vault fit together as akin to LEGOS, which allows water pass through freely.

"I don't expect them to bring in the storm trap until the third week of October," he said.

The project was divided into two halves, he noted, with the Kensington School developer installing the pipes upstream and downstream of the storm trap and the village's contractor doing the eastern section around Madison.

"All of the pipes are in except one little piece in the parkway of Madison. We ran into a conflict with some Nicor gas mains," Deeter related. Once those mains can be moved, the 36-inch pipes in that section can be laid.

Deeter said the flooding that has plagued the area after heavy rains should be only a memory after work is complete.

"It's going to be significant difference than what we've experienced in the past," he said.

One of the biggest road projects over the last two years has been the reconstruction of the western stretch of Hinsdale Avenue. Last year the village rebuilt the roadway between Monroe and Grant streets. The second phase this year completes the work from Monroe to Stough Street.

Last week concrete for the north lane was poured and has been curing, Deeter reported. Crews are now preparing to demolish the south lane, with concrete pouring scheduled for early next week.

The roadway and the Stough Street railroad crossing will remain closed during the reconstruction process, with the expectation that the road will be finished before the end of the month. Once the Stough crossing is open, repaving work at the Monroe intersection will close that crossing for a couple of weeks, Deeter said, adding that detour notices will be posted.

"Mid-November is when they'll have the whole project substantially complete," Deeter said.

Drivers on South Garfield Avenue Tuesday had to take a detour as crews worked on the reconstruction of Fifth Street, including storm sewer and water main improvements. Deeter said that was just a one-day inconvenience.

"They're basically abandoning the old water main and activating the new one. They switched all the services over," he said.

The resurfacing of Eighth Place from Madison to the east end cul de sac includes storm sewer improvements that may cause some short-term navigational challenges, Deeter noted.

"We're connecting into the sewers on Madison, so there will be temporary closures on Madison. I don't expect that to be more than a day's detour," he said.

"We're also resurfacing an number of areas of Chestnut Street from Vine to Lincoln. We're replacing curb and gutter where needed," Deeter said. "We're trying to keep traffic open as much as possible."

He said relatively cooperative weather has helped keep the work, all part of the village's Accelerated Roadway and Infrastructure Plan, on track to finish before fall is through.

"We're on schedule and on budget," Deeter said. "The crews are doing a good job with the quality of work."