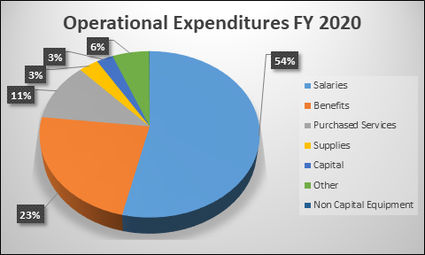 District 86 board members approved a balanced budget on Sept. 26. All but a small portion of the district's revenue comes from local property taxes. Salaries and benefits comprise roughly three-quarters of expenditures. (charts provided)

The Hinsdale High School District 86 Board Sept. 26 approved it first operating budget since the $139 million referendum passed in April. And officials say the receipt and subsequent spending of those bond proceeds will alter the look of financial statements the next several years.

Josh Stephenson, the district's chief financial officer, informed board members in his budget presentation at the Sept. 12 meeting that construction projects completed this summer were paid for with referendum proceeds. The $4.4 million originally allocated for the work was redirected "to address the backlog of equipment in need of replacement and complete small scale renovation work that falls outside the scope of the referendum."

He said the influx of revenue from bond sales - $70 million already sold and another $35 million slated for later this fiscal year - followed by staggered payouts as various facets of the plan are carried out will cause considerable rises and falls as the project schedule unfolds.

"That's because we're generating a significant amount of revenue from bond proceeds sales this year, but we won't incur a lot of the expenditures for the capital projects until following fiscal years," he added.

The start date of work, he noted, will play a role in the look of the balance sheet. "If we're able to start some work in April or we're pre-buying materials, we may expend more than we originally anticipated within the fiscal year and we may need to do a budget amendment before the end of the fiscal year," he said.

Expenses related to project design and construction have been included in the 2020 budget. 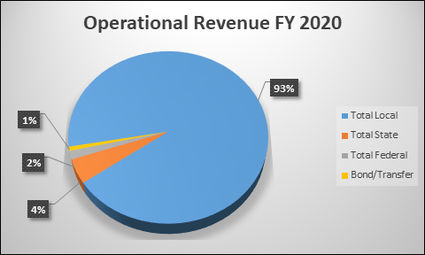 Board member Marty Turek pressed for a fixed amount to be allocated annually in the operating budget for facility maintenance and improvements.

"I think this board would be proud to set into motion a dedicated percentage of our budget going to facilities," he said. "I think it's good practice to do it in a year when we don't even need it."

Board member Kevin Camden, finance committee chair, said such earmarking is already in the works.

"It needs to be in there because every year we get these 'surprises' that we should be budgeting for," he said.

Stephenson said incorporating referendum funds was "not a big deal" but a new wrinkle.

"It's just something we've never done," he said. "We've never had anything this size and complexity going on within our fiscal year."