Girls on the gridiron 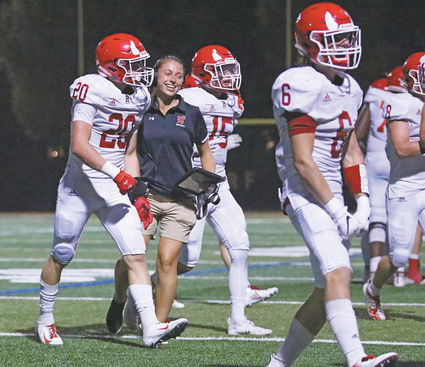 Allison Fish said working as an assistant defensive coach has given her new insight into the program. "I have so much appreciation now for the amount of time these people put into this sport," she said. "It's just so much more complex than I could have imagined." (Jim Slonoff photos)

That's the theme of the Hinsdale Central football program this year.

Yes, it's true. Look closely at the next game and you might spot coach Allison Fish working with defensive players on the sidelines and blond braids extending from the helmet of No. 34, wide receiver Chiara Gregor.

The two make joining a group of 80 players and half a dozen coaches - none of whom are women - look easy, varsity head coach Brian Griffin said.

"I think they're both in a situation where it could be weird or it could be awkward and their approach to it and their work ethic and what they bring has made everything very smooth and easy," he said. "They are both incredible people. I'm really glad they are part of the program."

Fish, who is in her fifth year as a social worker at Hinsdale Central, is a lifelong football fan.

"I've been a huge fan of the NFL probably since the age of 10," she said. "A big Packer fan, thanks to my stepdad."

She was on a Habitat for Humanity trip with Griffin when the two started talking about the possibility of her coaching, if an opportunity presented itself. This summer, while she was on her honeymoon, one did.

"I think if there is anybody to open the door for you, Brian Griffin is that guy," Fish said. "That's what I really think it takes for females to step in a role that is uncommon. It takes somebody not only believing that it should be happening, but that it could happen."

Fish brings experience coaching tennis, badminton and girls lacrosse. She also played tennis in high school and started playing Ultimate Frisbee while at the University of Illinois. She continues to play, competing on a national team.

"I bring a lot to this team, I guess, that really isn't about the X's and O's, necessarily, although I'm catching up and learning as much as I can," Fish said. "Being a social worker in such a game that requires so much mental toughness, I think, is really key. I think the guys have benefited off the field from having that support as well."

"Everybody's role in their real job informs what they do out on the football field," he said. "As a coach, I think having her has been a huge help in that regard - identifying ways to help the kids not just physically but to help them mentally.

Fish has still had quite a learning curve to bridge the gap between watching the game on TV and coaching it live. She credits Griffin and defensive coordinator Preston Letts for catching her up on technique and strategy. She's learning from the athletes as well.

"Still every single week when we are game planning for a new team, I have to learn so many new things," Fish said. "The kids have been really awesome going along that journey with me."

Conversations she has reviewing decisions individual players made on the field prove illuminating for both, she said. And no one seems to have an issue with her being a woman.

"They've asked the same questions - 'Did you play in high school?' - because they just assume I did," she said. "When they found out I didn't, I was just as open and honest with them as they would want me to be. Some of the best coaches weren't elite athletes in that sport or dominant in it."

She finds the most challenging day of the week to be Tuesdays, when coaches and players are preparing to face a new team.

"That's when we're really installing what we're going to do that's new this week," she explained. "Kids have lots of questions. I have to be comfortable not being able to answer all the in-depth questions the kids have."

Allowing the students to see her vulnerability is an important lesson, she believes.

"As a social worker, I always try to encourage students to get out of their comfort zone and get in uncomfortable and vulnerable positions, because I think only then can you learn something new and challenge yourself," she said.

And the rewards are plentiful. Seeing the defense stop Oak Park-River Forest Friday night was a thrill.

"There were two pretty key defensive series," Fish said. "I had chills all weekend thinking about it."

She also has a much wider circle of students to greet in the hall.

"It's great," she said. "The number of 'Hey, Coach Fish'-es I get during the day now, kids I don't even work one-on-one with a lot on the field. It really is a sense of community. There's just so many of them."

But there's only one other female in the program, and Fish spoke highly of her.

"She is calm, cool and collected all the time," Fish said of the junior wide receiver. "Sometimes we'll smile at each other. It's fun to have another counterpart on the sideline. She loves this game."

Unlike Fish, Gregor did not grow up with the game. She wasn't even wasn't exposed to American football until she moved here from Germany to with her dad when she was 13. She's played basketball, run track and been on the swim team, but something about football piqued her interest.

"It's just so different. You can't compare it to other sports," she said. "Football isn't just a sport. It's more like a family. It's completely different. There is nothing I would rather do."

She did have some reservations initially about joining an all-male team, but now she loves her teammates.

"They are super nice," she said. "At first I was scared, before I joined, of all the stereotypes there are. The guys are super sweet. They support me. They believe in me. I couldn't ask for a better team."

The physical part of the game is difficult and the competition is more intense than with girls sports, she said. Still, she's having a great time.

"Sometimes you go flying and you land on the ground and you don't even know what happened," she said. "You don't even feel it. It's kind of fun, honestly."

But she has her limits.

"I wouldn't play line," she confessed.

Her decision to play an unconventional sport has drawn no criticism, only support, from her female friends.

"They think it's pretty cool, actually," she said. "One of my friends (Matilde Camplone), I couldn't do this without her because she braids my hair every day. She is the best."

Gregor had the opportunity for her first start Monday, when the JV team shut out Oak Park-River Forest 14-0.

"I wish I would have scored," she said Tuesday. "I was open a few times but I didn't get the ball thrown." 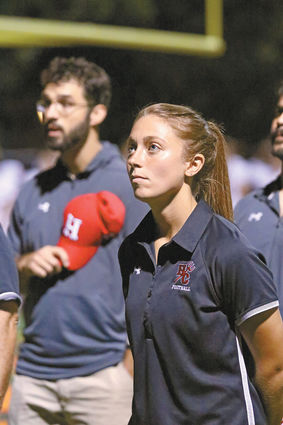 Varsity head coach Brian Griffin (to Allison Fish's right) said coaches and players were amenable to having a woman join the coaching staff. And Fish has been a great fit. "It's been fun to watch her step into that role and embrace it," he said.

With her positive attitude and obvious enthusiasm, she's even able to turn that into a positive. "It was good to improve my route running," she said.

And she enjoyed being nearby when one of her teammates, Isa Hitchens, was able to make a big play.

"He was right next to me, so that was pretty cool," she said. "I was blocking the guy on the edge. He ran 97 yards to get a touchdown."

Griffin said he doesn't worry about Gregor being on the field because he knows she's worked to prepare for the game.

"The kids I have reservations about are the kids who haven't put in the work and aren't physically ready to be out there. She worked out throughout the off-season," he said.

And her enthusiasm has been inspiring.

"She loves it," Griffin said. "It's a lot of time and a lot of work and if you're going to do it, you need to really enjoy it. She clearly loves it. She loves showing up every day and being a part of it."