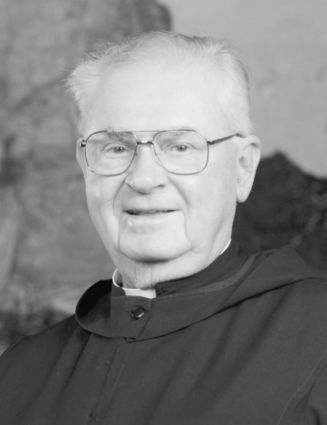 Born Joseph Kucera in Chicago in 1927, he had two older brothers in Lisle when he arrived in 1941 as a high school freshman: the future Father Mathias and the future Abbot and Archbishop Daniel, who preceded him in death. He is survived by his brother Henry.

In 1947, Father Edward began a career in the classroom at what is now known as Benet Academy that lasted until 1962, teaching such subjects as history, religion, science and mechanical drawing.

He was ordained to the priesthood by Bishop Martin McNamara in St. Raymond Nonnatus Cathedral, Joliet, on May 30, 1953. From 1955 to 1961, Father Edward served as athletic director of St. Procopius Academy.

In 1962, Father Edward began a 20-year post as a much-respected chaplain with the Air Force. Early in 1984, he returned to Lisle as pastor of St. Joan of Arc Parish, but some health issues required him to relinquish that position the following year.

Still vigorous at the age of 81, he was assigned to assist with campus ministry at Benet Academy when he came back to Lisle in 2008, and for the next nine years he was an admired figure on campus as he sought to encourage frequent reception of the Sacraments.

Reception of the body, Vigils and viewing will take place from 7 to 9 tonight, Sept. 26, at St. Procopius Abbey, 5601 College Road, Lisle.