Excitement for homecoming is heating up 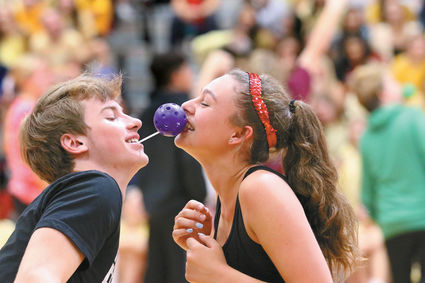 Hinsdale Central kicked off Homecoming week with a pep rally Friday. Ava Loughlin and Bennett Willman were among the students selected to participate in various contests. Homecoming king and queen candidates, including Nick Moawad and Genny Harlow, were also announced at the pep rally.

Hinsdale Central senior Sydney Thayer has been thinking about Homecoming since last spring.

She hasn't been dreaming of the perfect date or the perfect dress. As co-president of Varsity Club, she's been involved in the nitty gritty details of making this week a success.

The club's executive board chose the theme, "Let's Get Fired Up," in the spring. But much of the work was still to be done when classes resumed in August.

"We really only have five weeks with our full club at the beginning of the year to plan everything else," Thayer said, from decorating the gym for the dance to choosing spirit days to organizing the parade.

"They are very hectic," she said of the first few weeks of school, especially as the 60-member club welcomes new students who have to be brought up to speed.

"It's really hard getting to balance getting to know everyone in the club and getting things done," she said.

Football and other programs at Hinsdale Central were in jeopardy of being cut if voters did not approve a $139 million building referendum in April.

The measure passed, but some students were already feeling disconnected from activities, Thayer said. The theme is designed to help rekindle school spirit.

She and Sally Phillip, Central activities director and Varsity Club sponsor, are both excited that the varsity football game will be played Friday night this year.

"I think overall it will help school spirit more because more people are willing to go to a Friday night game than a Saturday game," Thayer said. "We all thought that was a really good change."

Phillip noted that students who are normally are getting ready for the football game will be able to enjoy the parade Saturday morning.

"I can't wait for the kids to be at the game and stay at the game," she said. "I love Friday night football here and I think to add Homecoming to that is really exciting. I think it's a really cool new addition to our tradition."

Other activities this week include dress up days, the Hall of Fame induction banquet and a pep rally on Friday.

Class reunions also are taking place this week. Rick and Nancy Morris, who met at Hinsdale High School, have been coordinating their Class of 1969's 50th reunion at Highlands Golf Club. Nancy Morris said she's looking forward to seeing old friends and catching up with others from the class of about 550 students.

"I think this will probably be our last one, so it's kind of a special occasion," she said.

In addition to the Saturday night party, classmates will gather for a meet and greet at Casa Margarita before the game Friday night and then meet up for the parade Saturday morning.

Back at Central, Thayer will be busy Saturday morning with her favorite assignment of the week.

"I think that I'm most excited for decorating for the dance. It's really fun," she said. "You really feel like you're doing something that the whole school will enjoy."

Phillip said she enjoys seeing graduates come back and the way the whole town comes out for the parade. She also enjoys the energy of the week, especially during the moments right before the two pep rallies - the one last Friday at which the court was announced and the one this Friday at which various skits will be performed.

"I think my favorite part is walking into that gym and seeing it fill up for both pep rallies," she said.

Thayer, who is attending Saturday's dance with a group of friends, said she probably won't be able to fully relax until the after-party, But she doesn't expect to stay up too late after a busy week.

"It's a lot of early mornings and a lot of full days, but it's definitely worth it," she said.

"It is exhausting but it is so much fun," Phillip agreed.

The varsity football game time has been changed to 12 p.m. Saturday since this story was originally posted.

Starts at the senior parking lot then proceeds north on Grant to Seventh, east on Seventh to Garfield, north of Garfield to First, west on First to Grant, then south on Grant back to Central

Let’s Get Fired Up