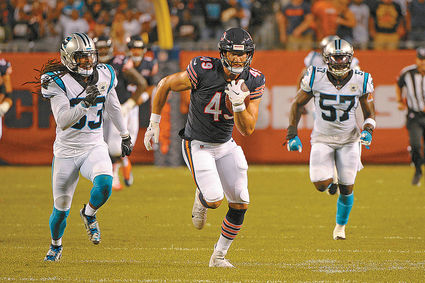 Hinsdaleans Ian Bunting (above) and Thomas Ives (photo below) were both acquired by the Chicago Bears in the spring as undrafted free agents, a remarkable twist of fate after having been teammates at Hinsdale Central. They both featured prominently in preseason games and won practice squad jobs, Ives with the Bears and Bunting with the New York Jets. (photos provided by Ian Bunting and Joy Ives)

The National Football League is back in action, and Hinsdale is well-represented. Among the local products competing are former Hinsdale Central standouts and teammates Ian Bunting and Thomas Ives. The tight end and wide receiver, respectively, joined the Chicago Bears as undrafted free agents for the preseason training and game schedule.

As a result of their performances, the Bears kept Ives on its 10-member practice squad while the New York Jets signed Bunting to theirs. In this Q&A, the two share what it means to be a pro - and what their hometown means to them.

What was your reaction when the Bears brought you in as an undrafted free agent?

Bunting: When I got the call from Coach (Matt) Nagy and the Bears, I was ecstatic. I was thankful and excited for the opportunity to continue my football career.

Ives: I was thrilled when I initially got the call. It was an honor to be signed by my hometown team and have a chance at playing in the NFL.

How would you describe your training camp experience?

Ives: It was unlike anything I had ever experienced. Having thousands and thousands of fans out in the summer heat watching practice was special as it confirmed my previous belief that Bears fans are the best in the league.

Bunting: Training camp with the Bears was great - they run a tight ship and it's a top-notch program. I played really well in camp and throughout the preseason. Ultimately, my film from the preseason with the Bears would prove to become my resume for the other teams that were interested in picking me up.

Was there an instance when it really hit you that you were playing in the NFL?

Bunting: I would say it really hit me when we had our first open practice at Soldier Field toward the end of camp. The energy in that place is contagious and there was a pretty good showing, even though it was just a practice.

Ives: It was an exciting experience. It was my first time stepping out onto Solider Field padded up and in front of fans. Something I dreamed of doing.

Congratulations on making practice squads! How are you hoping to develop as a player in that role?

Bunting: I'm so thankful for the Jets giving me this opportunity, and I am working to just consistently get a little bit better each day. I try to focus on one or two things each practice to improve on, and I believe that in this business and this process, as in much of life, there is no secret recipe for instant floor-to-ceiling improvement. Once I understood that, it allowed me to chip away a little bit every day and not try to do too much too soon. After stacking several days, weeks and months of small improvements consistently, I can look back and realize how far I've come.

Ives: I plan on taking advantage of every day, continuing to learn how to be a successful pro from older guys around the locker room as well as being a sponge with details about the playbook.

What's your message to all your Hinsdale fans?

Ives: This (Bears) organization is filled with great football players as well as great people. There is something special about this team. We have been relentlessly working toward the goal of winning the Super Bowl. Bear Down! 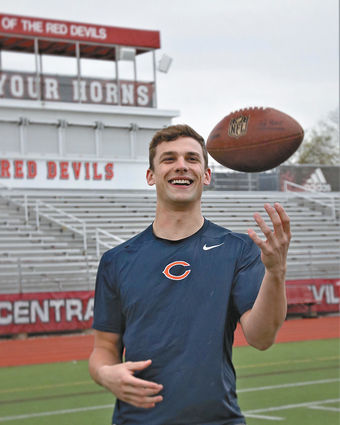 Bunting: My message is fairly simple: Thank you. Thank you for your unwavering support, not just now, but before I was here, when I was working my way to get here. They say it takes a village to raise a kid and I believe that. I've had countless coaches, teachers, friends and parents that have helped me get to this point, and their support has always been there whether I was doing well or struggling. My path has not been a smooth one by any stretch of the imagination, so thanks to all of you who have been there for me along the way - especially during the tough times. It does not go unappreciated.