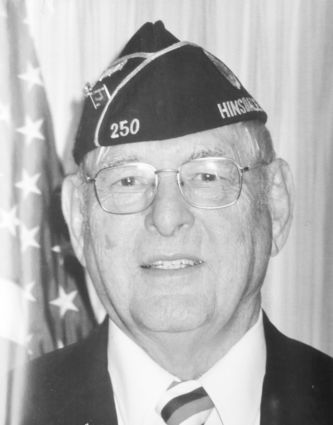 George was born in 1923 at his family's home on Clay Street in Hinsdale. He was a radioman in the U.S. Navy during World War II, serving in the Pacific campaign. He reminisced about being in Tokyo Bay at the time of the Japanese surrender and about sailing in the rough waters of the Bering Sea on the light cruiser the USS Detroit.

After the war, he worked for Automatic Electric/GTE in Northlake for almost 40 years. In retirement, he returned to his elementary school, Madison School, to work as a janitor and also volunteered there as a senior reader.

George was actively involved in Naperville VFW Post 3873, Hinsdale American Legion Post 250 and was a past commander of the Hinsdale VFW Post 4946 from 1999 to 2002. He is known for reciting the poem "In Flanders Fields" at the Hinsdale Memorial Day ceremony. He spoke to numerous school classes in Hinsdale and Naperville about World War II.

He was also well known for his holiday-themed pins, which he created and stitched and gave away to people just to see them smile. He enjoyed fishing, golfing, gardening and watching the birds that visited his bird feeders.

He is survived by his daughter, Laurie; his nieces and nephews, who called him "Uncle Pooty"; and many friends.

Interment is at Abraham Lincoln National Cemetery in Elwood at 1:30 p.m. Friday, Sept. 13.

Memorials may be made to the VFW National Home, Honor Flight Chicago, JourneyCare Hospice, Hinsdale American Legion Post 250 or a charity of choice.