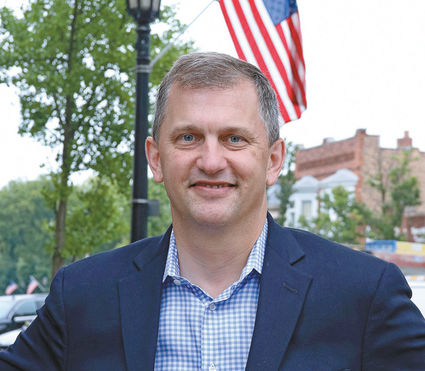 Sean Casten, who is serving his first term in the U.S. House of Representatives, said he's worked hard in the past year to stay in touch with his 6th District constituents, but he doesn't think he deserves praise for doing so. "I think that's the bare minimum of the job - being out there, being accountable, chatting with people on what's going on," he said.

Sean Casten and his wife, Kara, have spent the past couple of weeks helping their daughters - Gwen, a high school sophomore, and Audrey, a sixth-grader - acclimate to the new school year. Gwen has a full calendar as a member of the Downers Grove North High School marching band and JV tennis team.

"I'm not sure which of us has the busier schedule - Gwen or me," Casten quipped.

That's saying something, as Casten was pretty busy himself, traveling the 6th District before he returned to Washington for the final four months of his first year as a U.S. congressman.

Although Casten grew up in New York and attended college in Vermont and New Hampshire, his family is well-known in Hinsdale, about half of which is in the 6th District. Casten and his parents, Tom and Judy, all moved to Illinois in 2007, with his parents settling in Hinsdale and he and his family in Downers Grove. At that time, he and his father started a company that became Recycled Energy Development, which they sold in 2016.

"It's really just by weird coincidences of luck that we all ended up living here," he said.

He spent part of his time in the district last month visiting local papers, including The Hinsdalean.

He said he's focused his efforts on the promises he made to voters during the 2018 election and pointed to his work on climate change.

"It was pretty flattering to get in and almost immediately get a call from Nancy Pelosi saying, 'We really want you to serve on the Select Committee on Climate Crisis,' " he said.

He's also the co-chair of the climate committee for the New Dems Caucus, a group of 102 pro-market, pro-business Democrats.

"Essentially almost any bill on climate and energy policy that's going to come to the floor, I have some vantage point to sit on and opine on and weigh in," he said. "We've brought a number of good ones forward and have a lot of work left to do."

He believes his constituents are knowledgeable about the benefits of renewable energy and conservation, but many don't understand his call for swift action in the legislature.

"So many things that are happening with the climate are happening on a totally nonlinear basis," he said. "When people don't understand the urgency of the crisis, it makes it hard to get the political will to move as quickly as we need to if we're going to avert catastrophe."

He also has been working to address another issue important to Hinsdaleans, the $10,000 cap on deductions for state and local taxes paid, or S.A.L.T. cap. The average family here pays $45,000 in those taxes, Casten said, and now is being double-taxed by the federal government on $35,000 a year of income.

"I would be happy to see the entire S.A.L.T. cap repealed, but we have to have a way to pay for it," he said.

Casten also promised voters to hold at least four town hall meetings a year. So far his office has held 12, gathering crowds ranging from 75 to 300. He appreciates hearing from constituents but would prefer the dialogue to focus less on partisan politics.

"If I could have one wish to change the way we talk about politics in this country, it's that we would talk about policies rather than breaking everything down into a Republican or a Democratic idea," he said.

He disavowed the notion that a particular party has a monopoly on a particular platform. When he voted for George H.W. Bush and Bob Dole in past presidential races, the Republican party believed in working for cleaner air and a more welcoming attitude toward immigrants.

Now the GOP is led by a president who attacks the World Trade Organization and NATO and boasts about sexual assault, he said.

"None of those are consistent with the views of the Republican party that I grew up with," he said.

The whole notion of defining everything by two parties is counterproductive, he believes.

"To the extent we can say instead, 'What are you doing to ensure good policies become law?', that's a useful conversation," he said.

One of the challenges of his job is serving at a time when the public believes "government is the problem" and has no interest in adequately funding the staff members who do much of the work in Congress.

He compared his $1.3 million annual staff budget to the $13 million he and opponent Peter Roskam spent during the 2018 campaign.

"We spent 10 times as much to elect our representatives as we do to make sure they have the resources to do their job," he said. "That's a huge problem. We need to find a way to talk about that that doesn't become an attack ad."

He also believes voters should stop applauding politicians for doing things that are "laughably trivial," like working across the aisle or basing their decisions on fact rather than public opinion. That sends the message that doing the bare minimum is acceptable.

"If we held our elected leaders to the same standards we hold everybody else in society, we'd be vastly better off," he said.