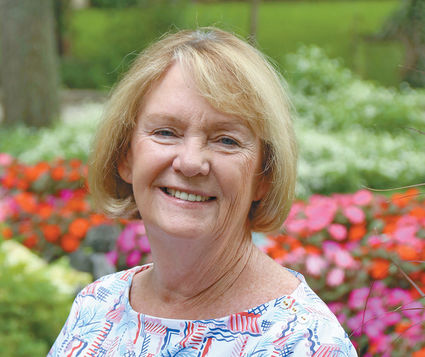 Maureen Hegarty MOTHER OF KATIE, KEVIN, TERRY & Jessica • ENJOYS READING AND BEING OUTDOORS • MARRIED TO TERRY • GREW UP ON CHICAGO'S SOUTH SIDE • HAS LIVED IN HINSDALE SINCE 1991

Hinsdale's' Maureen Hegarty just returned from the National Assistance League Conference in Las Vegas. As a longtime member of the village's Assistance League Chicagoland West chapter, she enjoyed the fellowship with other volunteers from the organization's 110 chapters nationwide.

"It's really nice to network and share ideas with the different chapters and see how they do things," Hegarty said.

One idea that seems unique to ALCW is the New Start program providing kitchen essentials to those transitioning from homelessness to independent living.

"We haven't found any other chapter that does that," she said, with a modicum of pride.

Hegarty has served with ALCW since 2006. Previous volunteer endeavors included leading the Monroe School PTO - and the effort to pass a referendum to build Clarendon Hills Middle School - and as executive vice president for the Hinsdale Theater Foundation.

"Through the theater group and the referendum effort, I got to know a lot of the members of Assistance League," Hegarty said. "It was an enticing group that was focused on hands-on community service."

At that time New Start had just been launched, and Hegarty felt a calling. "That really captured me. I just thought that was such a cool idea," she said of the kitchen outfitting concept.

Over the years she's headed up nearly all of ALCW's committees. Most recently she's been co-chair of the annual Books & Brunch fundraiser held in November and helps to plan other outreach events, like last month's Sip & Shop event at J. McLaughlin.

"We feel it's nice if we can partner with the community that supports us. We want to support them," Hegarty commented.

Hegarty previously worked as a nurse supervisor at Mercy Hospital and relishes caring for people in a different way through ALCW. The notion of living in poverty can feel like a distant concern to many in Hinsdale, she said, but the need is closer than many think.

"DuPage County has such a need. People are moving here from Chicago looking for a better life," Hegarty related. "But now they need a car, they need a job and all of sudden they're homeless. I think people are shocked to hear that our community is in need. We've got people from Hinsdale Central and Hinsdale South (high schools) that are homeless."

She said the recent referendum for a new Hinsdale Middle School brought back memories of the last ballot measure - but stirred no yearning to take an active role.

She was also a big-time proponent of it, even though she and her husband are now empty-nesters.

"It's just as important when your kids leave the school that you support our kids and education, very important," Hegarty said.

Supporting ALCW will continue to be an important facet of her life, as well.

"I think as long as I can contribute, I can see myself being involved for a long time still," she said.