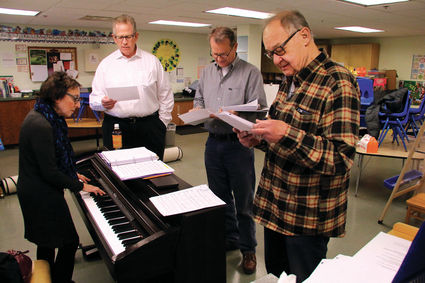 Dick Johnson (from left), Jay Tuthill and Norm Chimenti run through a song with music director Gail Mangurten for the 2017 Community Revue, "Hinsdamilton." The three will be among a dozen or so performing highlights from past shows at The Community House Patron Party Sept. 19. They will be joined on stage by Craig Milkint (far left) and B.J. Chimenti (front left), shown here rehearsing for a number from "Hinsdale 911" in 2008. (file photos)

The Community Revue is the kind of benefit performance that could make the executive director of any nonprofit nervous. It's edgy, irreverent and sure to raise an eyebrow or two.

But the last revue in 2017 sold more than 1,000 tickets and raised more than $50,000 for The Community House. And that's just one of 11 shows that have been performed since 1997. Each also represents an incredible investment of time in writing, rehearsing, set building and other activities.

Those efforts will be celebrated Thursday, Sept. 19, at The Community House Patron Party.

"It dawned on me as I've heard these amazing stories that we needed to stop and say, 'Thank you,' " Krug said. "It's good manners more than anything else."

The patron party has its roots in another popular Community House fundraiser, the Antiques Show. The Thursday night before the show, the agency would host a special Preview Party.

"When the Antiques Show came to a close, they kept that Thursday night event as a holdover because they wanted to continue to find a moment in the fall when we did just that - celebrate our work and our mission and the people who support it," Krug said.

The focus on the revue at this year's party is an appropriate continuation of the event's theme for the last couple of years, Fall in Love with the Arts.

And has been the case in the past, the evening will include entertainment. Thirteen cast members will present a retrospective of past performances.

"If they do this amount of work for a 30-minute 'Best of' with things they already know and love, I can't imagine the scale of their time that goes into a new production," Krug said.

Norm Chimenti, one of the show's original cast members and an organizer of the patron party performance, said it was no easy task to choose from the 200 or so songs that have been performed since 1997.

"When you go back and look at them - and we did - in selecting the assortment for performance, it was mind-boggling to look back at all the different numbers that we've done," he said.

Songs from shows like "The Book of Mormon," "West Side Story" and "Something Rotten" were re-written with lyrics that poke a little good-natured fun at Hinsdale's beautiful, wealthy, accomplished residents. The patron party performance will feature the same satire and sarcasm that audience members of the show have come to expect, Chimenti said.

"We just didn't think it would be right to portray these thousands of hours of effort over the last 22 years in a way that was not worthy of the format of the actual shows," he said.

Which songs will be highlighted? The same shroud of secrecy that surrounds the actual shows apparently is in effect for this performance as well.

"We don't want to eliminate the surprise," Chimenti said.

He was willing to reveal that the performance will not involve a group of folks standing around a microphone. There will be blocking. Lights. A professional accompanist. Even some simple dance steps. And, in keeping with tradition, an unexpected cameo.

Krug said she also will unveil a gorgeous plaque and highlight plans for improvements to the south patio.

Guests will enjoy cocktails and fabulous food. If they want to meet some former cast members, they're sure to find them in the foyer, watching the video loop of favorite clips from past revues.

Sally Porter, who is co-chairing the event with husband Jim and Ann and John Grube, said there have been some truly memorable moments over the years.

"I have a vision of John Sachanda as Shrek that just doesn't go away," she said with a laugh.

She finds the show offers an interesting perspective on life in Hinsdale.

"We always refer to this town as a bubble, so you could step outside a little bit and look in, I think," she said. "I think it's been terrific."

She said she's looking forward to the next revue, originally slated for last spring but rescheduled for Feb. 28-29 and March 6-7 of 2020.

The title is secret, of course, but The Hinsdalean obtained this teaser: "You can't win unless you play the game and, in Hinsdale, winning is everything." 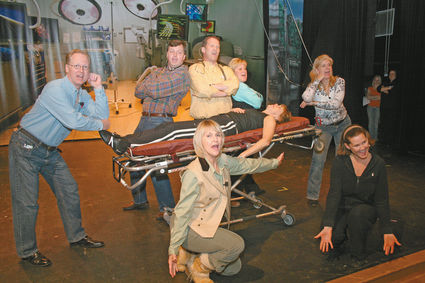 Krug said she hopes the patron party generates broad support from those who care about The Community House's mission.

"Whether you can connect the dots or not, you have been touched by Community Revue - whether you were seated in the audience or not," she said. "This just gives you a chance to get a little closer."

The Community House Players have presented 11 original comedic musical revues over the past 22 years, tackling just about every subject from teardowns to overturning Prohibition to the District 86 referendum.