Mother knows best when it comes to design 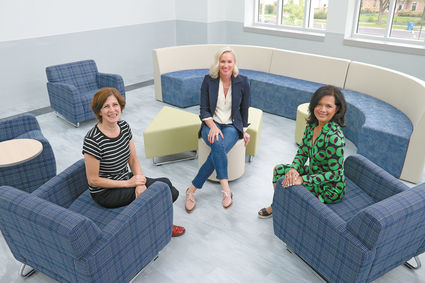 Before Maria Grillo (from left), Michelle Lin and Joy Kepouros posed for this shot in a second-floor sitting area at Hinsdale Middle School, they rearranged the furniture so the space would look the way they envisioned when they helped choose fabric, color schemes and finishes for the new school.

None of those adjectives would have been used to describe the old Hinsdale Middle School. But they are quite fitting for its successor, thanks in part to a three moms who lent their design expertise to the construction process.

"I think we recognized the strength of our community - that we have a variety of outstanding resources that we need to leverage more often," HMS Principal Ruben Peña said. "I couldn't pay for a better group of people."

Interior designers Michelle Lin and Joy Kepouros worked to select fabrics and finishes for the new three-story school, which welcomed students in January and is open for the full school year this year. The two selected fabrics that complement one another in a given space and throughout school as a whole.

"As you go to the school, walk through, you don't want it to be so disconnected," Lin said. "You have to have some thread to marry the whole thing together."

The two traveled to the Merchandise Mart in Chicago to make their selections from thousands of different fabrics. Fortunately the company reps who met with them had some suggestions to help narrow the choices.

"They had almost storyboards of things to choose from," Lin said.

Creating a look that would be timeless was one of many considerations, Kepouros said.

"Good quality, right colors, scale - all the principal elements of design, we brought it in to make sure they got the best of the best," she said.

" 'What is the big picture?' 'What is the impact of the space?' 'What is going to make it look like this is our school - I'm happy?' We wanted to create a happy school," she said.

Teachers also need to be happy, and their insight into middle schoolers' habits, like how students might behave while sitting in a chair with wheels, were important, Lin said.

"I'm not a teacher. I don't know sixth-graders shouldn't have casters on their chairs," Lin said. "That was invaluable to making the correct selections for the long term and workability in the room."

Parent Maria Grillo devoted much of her energy to designing a much-needed new logo for the school.

"We've never really had a logo," Peña said. "It's always been clip art. It was a special opportunity we couldn't miss."

Grillo worked with Kristen Cullen, one her employees at The Grillo Group, to create the logo.

"We wanted it to be something that was strong and bold and was sort of a different take on the Spartan icon that you see all over the place," she said. "Everybody seemed to really like it. That was the measure of success."

The logo is prominent in the gymnasium, which features a floor designed by Grillo as well.

"I loved seeing that come together," she said. "I had to learn about basketball and other sports I didn't really know anything about."

She also worked on the color scheme for the school as a whole, working to incorporate the navy blue and white in different ways that made the space feel open and bright and like good things were happening inside. 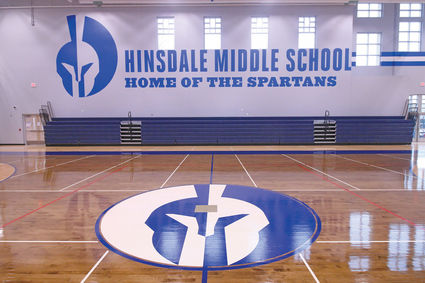 Grillo also worked with one of her colleagues to design a new Spartan logo that features prominently in the gym. The three women - all moms of current or former HMS students - collaborated with architects, teachers and kids.

"If I was a kid, I would be excited to walk in those doors," she said.

Peña said the team's expertise helped guide decisions such as using a more expensive ceramic tile flooring on the main level, where high traffic warranted greater durability. Other choices, such as reducing the number of trophy cases in the school, helped save money to make up the difference in price.

Grillo said the entire team worked well together and complimented Peña on the leadership he provided, especially since his background is not in construction.

Peña said he appreciates the time and energy that went into creating an inspiring, engaging building.

"I'm thankful for everybody that raised their hand to be involved, and I'm super thankful for these highly qualified, intelligent women that contributed to the legacy of the school," he said. "They made a commitment to this community to last generations."