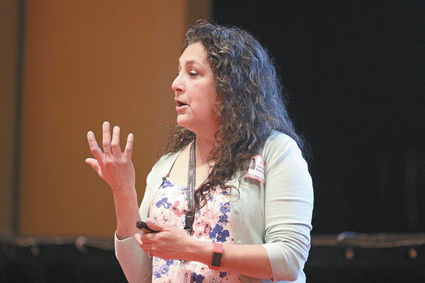 Last year almost a third of high school seniors in DuPage County reported vaping during a one-month period. And while health professionals know many of the dangers associated with vaping, no research has been done on some of the chemicals users will inhale. "They are just throwing the products out there," Lupe Corona said.

Three days after students at Hinsdale Central High School heard a presentation on the dangers of vaping, the Illinois Department of Public Health reported the death of an individual who had recently vaped and was hospitalized with severe respiratory illness.

The Centers for Disease Control and Prevention also indicated last week that more than 149 possible cases of severe lung illness associated with e-cigarette product use were reported by 15 states between June 28 and Aug. 20.

While e-cigarettes originally were marketed as a healthier alternative to smoking cigarettes, they are far from healthy, Lupe Corona, a health promotion specialist with the health department, told the Central freshmen.

E-cigs, e-hookahs, mods, vape pens, vapes and tank systems allow the user to inhale and exhale aerosol that is filled with chemicals and, often, nicotine, Corona explained. While the devices originally were marketed to adults trying to quit smoking, manufacturers soon found a larger market among adults who didn't smoke - and young people.

"They started calling themselves vaping so they would appeal to a more general population," Corona said.

Many young people are not even aware of what the products contain, Corona said.

"More than half thought it was just flavoring," she told students.

But the "vape juice" that is heated and then inhaled can contain volatile organic compounds, cancer-causing chemicals and heavy metals (including nickel, tin and lead), Corona said.

The diacetyl used for flavoring is FDA approved for consumption, not inhalation, she said. The chemical, which is used to flavor microwave popcorn, has caused permanent lung damage in factory workers who inhaled it.

"Once it's released into the air and goes into your lungs, it causes 'popcorn lungs' - the scarring of the lungs," Corona said. "You're supposed to eat it, but you're not supposed to inhale it."

And many vaping devices contain nicotine - even some that say they don't, she said.

"What we know about nicotine is that it is highly addictive," she said. "It can damage the developing brain. The younger a person is when they start using a product with nicotine, they more addicted they become and the harder it is to kick the habit."

All products made by Juul, the No. 1 vaping manufacturer, contain nicotine, she told students. A single Juul pod contains the same amount of nicotine as 20 cigarettes - an entire pack.

"The Juul pods are lasting anywhere from two to three days," she said. "That's 20 cigarettes worth of nicotine in a very short time.

We don't know what the health effect is going to be for a developing brain during that time."

Federal laws prohibit tobacco companies from marketing to young people, but those rules do not apply to vaping products, which do not contain tobacco. Corona showed students an ad for a vaping pen that was lying among various school supplies. A "to do" sticky note listed studying, groceries, band practice and vape time.

"Why was it made to look that way if it wasn't for youth?" Corona asked the students.

Vaping manufacturers also are not subject to the 2009 federal law that banned fruit- and candy-flavored cigarettes, Corona said. Some vaping flavors mimic kids' breakfast cereals such as Cocoa Puffs and Lucky Charms or treats such as cotton candy and caramel corn. 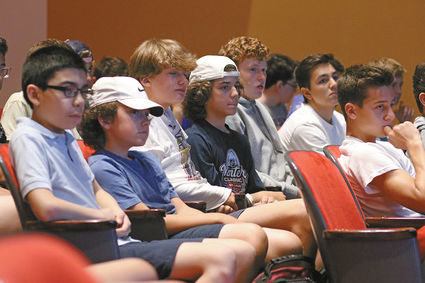 "Those flavors aren't for middle-aged adults. Those are for a younger generation," she said.

And while health professionals know that vaping effects three of the body's most important organs - the brain, lungs and heart - they won't know the full consequences of vaping for decades.

"These really have only been around for a very short period of time," she said, noting people smoked cigarettes for 50 years before they were linked to lung cancer and COPD. "We really don't know how they affect the human body.

"When are we going to find out? Years down the line, with the people who are vaping now," she warned. "Unfortunately, their lungs will tell us in the future."

Visit https://www. thetruth.com/the-facts for facts about smoking and vaping and tools to help smokers and non-smokers end both.