Value engineering can save enough money to cover cost of larger pool, according to experts 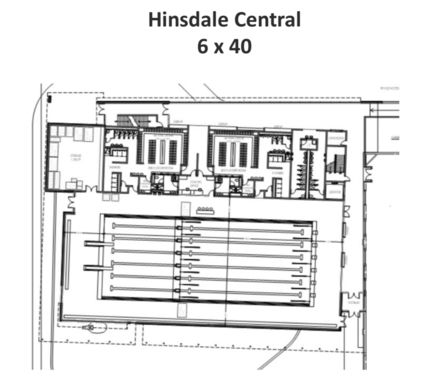 The District 86 board wants both district high schools to have pools with at least six 40-yard lanes. Now board members must decide whether to further enlarge the plan for Hinsdale Central's pool to eight or 10 lanes. The additional cost can be offset by value engineering decisions, such as eliminating a corridor or shrinking the storage area, experts say. (sketches provided)

After determining that the new pools at Hinsdale Central and Hinsdale South high schools should be 40 yards long rather than 25, Hinsdale High School District 86 Board members now must decide whether to build a six- or eight-lane pool at Central.

Hinsdale High School District 86 Board members heard from architects, their owner's rep, administrators and community members at their Aug. 22 meeting as they reviewed options for the two pools.

The plan to keep six-lane, 25-yard pools at both schools as stipulated before the April 2 referendum was dismissed fairly quickly due to the price tag and upkeep associated with the movable floors. The $1 million floor, which would cost $10,000 a year to maintain, would provide flexibility, rising to create a shallow pool for learn-to-swim and adaptive PE classes and lowering for diving meets and water polo competitions.

That left the board to consider widening Central's pool from six lanes to eight or 10 lanes by using value engineering in other pool design components to offset the additional $1.9 million to $3.5 million cost. Eliminating one of the corridors, reducing the size of the storage area and moving some equipment to the roof could save the district significant money, said Lance Tritsch, project director for Pepper Construction.

"We could find $2 (million) to $3 million pretty easily in value-based decisions," he said.

Superintendent Tammy Prentiss said she and Janelle Marconi, physical education department chair for both schools, reviewed the work done by the pool task force and current course offerings and stand by the group's recommendation for an 8-by-40 pool at Central and a 6-by-40 pool at South.

"The pool task (force) got the vision and the instructional need correct," she said.

The pool at South cannot be expanded beyond six lanes because the area that houses it is landlocked. Hinsdale South Principal Arwen Pokorny said a six-lane pool would meet the instructional needs at the school.

"I'm not concerned at all about us having a 6-by-40 pool," she said.13Board members seemed to agree an eight-lane pool would better meet instructional needs at Hinsdale Central, where enrollment is almost twice that of Hinsdale South (2,726 to 1,445). But several said they are worried about altering promises made to voters before they approved the $139 million referendum in April.

"I know we said it's the same size pool (at both schools) on that referendum and it's really tough," board President Nancy Pollak said. "It's really tough not to keep that piece that we said in April and what the community voted for. We are in a pickle."

Board members Erik Held, Marty Turek and Keith Chval all supported an eight-lane pool, with Chval as the strongest advocate. He asked the board to imagine how future residents would evaluate a vote to build a pool that on opening day would be too small to meet instructional needs.

"What were they thinking 10 years ago?" he suggested they would ask. "Why did they not adjust? Did they not have the fortitude to do that?"

"I'm really sticking with what is as close to what was passed by the public, so I'm going to stick with 6-by-40," she said.

While Camden said he did not see a compelling need for an eight-lane pool, he did note the district will save $4.2 million in interest payments due to a favorable interest rate on the first set of bonds issued. He also suggested community members who are interested in a larger pool could offer financial support to make up the difference in cost.

"If the want is there for more, I think there may be an opportunity for folks there who want to fund it," he said.

Board members also agreed they would like the new community engagement committee (see sidebar on Page 13) to weigh in before making a decision. Pollak announced the board would postpone a vote until the Sept. 12 board meeting.

"I think I would like the opportunity to hear from the community," she said.

A handful of residents opposed to the larger pool at Central did speak at the meeting, with Yvonne Mayer of Burr Ridge calling it a "bait and switch" and Stacey Tantillo of Darien saying she "worked her tail off" to get people in the South attendance area to support the referendum.

"The biggest bone of contention was the pools," Tantillo said. "If you go ahead and you drop an 8-by-40 pool into Central, you are going to lose the belief that a lot of community members decided to put into this school district."

The committee, which will be a joint committee with facilities, has been charged with engaging and leveraging the expertise of the community to help support the construction process in the district.

“On behalf of the board and administration, I want to thank everyone who applied for a position on the special committee regarding community engagement with construction,” said board member Marty Turek, who will chair the committee. “This process was a great reminder not only of the immense talent and expertise we have in our community, but also how strongly committed people are to the success of our students, staff and schools.”

• Bill Carpenter, professional with 12 years of experience as a contractor and accountant who is a former president and member of the District 86 Board and served on the D86 Facilities Committee

• Tamakia Edwards, capital construction program manager with more than 15 years of experience in areas that include safety and security, infrastructure and accessibility

• Ehab Elqaq, electrical engineer with 26 years of experience who is LEED certified in building design and construction

• John Ochoa, architect with more than 30 years of experience in education design who has worked on a projects for elementary, middle and high schools

Forty people applied to serve on the committee. Applications were reviewed by a team comprised of Turek, other board members, D86 staff and owner’s rep Dorothy McCarty.