Veterans have loyal friend in Auxiliary 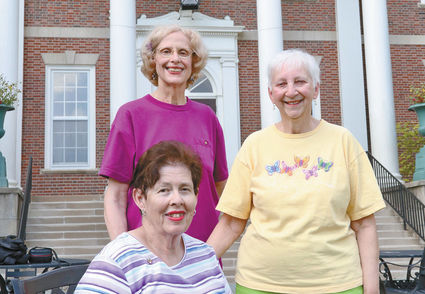 When the American Legion was chartered by Congress in 1919 to support those returning from the World War I battlefields, many felt "the Great War" veterans organization needed an equally great mate.

The American Legion Auxiliary was founded by women committed to serving those who still had health battles to fight back home and their families. Auxiliary eligibility extended to wives, mothers, sisters and daughters of American Legion members or service members "between April 6, 1917 and Nov., 11, 1918, and who died in the line of duty or after honorable discharge."

The Hinsdale Auxiliary was established in 1923, three years after the creation of Hinsdale American Legion Post 250. Carol Baumann, the Auxiliary's longtime president, said local women were instrumental in the construction of Memorial Hall as both a home for village offices and a monument to those service members who made the ultimate sacrifice.

"The ladies went around and collected from all the residents in Hinsdale," Baumann said. "They gathered up the money and had the building built."

As a gesture of gratitude, the Auxiliary was granted permanent use, along with the Legion post, of space on the second floor.

"The village gave the American Legion and the Auxiliary our own room, the Soldier's and Sailor's Room, rent-free for eternity," Baumann said.

Records of those early years have been well-preserved. The year-end summary for 1924 details the Auxiliary's acts of benevolence, such as purchasing grape juice, pajamas, pillows and flowers for veterans convalescing at nearby Edward Hines. Jr. VA Hospital, then known as Speedway Hospital. The group took special pride in the horticultural projects it nurtured there.

"Miss Willard, the head of the psycho-therapy department, told of the benefits to the men of the hospital, derived from the work ... laying special stress on the importance of the work in the gardens and green-houses," the entry reads. "The Auxiliary of the American Legion at Hinsdale was the first to contribute money, shrubs, plants, bulbs and seed to this project."

Enhancing the feeling of gratification was the fact that the endeavor was carried out despite little encouragement from superior officers.

"The results showed a 60 percent improvement in the condition of the men," the minutes proclaim.

Baumann, who grew up in Hinsdale, has deep ties to the American Legion and Auxiliary. Her father, Winston Baumann, was adjutant of Post 250 for 50 years. And she remembers her grandmother going to Hines Hospital every Wednesday to distribute toiletries.

"My mother, Charlotte, became involved, and she was the (Auxiliary) president for a lot of years. When she became ill, I said, 'OK, I'll do it,' " Baumann related. That was more than 20 years ago.

"It's a very good cause," Herrmann said, noting the annual Poppy Day fundraiser the Auxiliary sponsors around Memorial Day. "One hundred percent of our poppy donations go to veterans organizations."

Merritt is secretary. She took over the Post newsletter after her husband, Thomas Merritt, passed away, and she also serves as the Auxiliary's chaplain.

She remarked that the men of the Post enjoy the fellowship of the Auxiliary women.

"They like it when there's a function and we serve the cake," Merritt quipped, evoking laughter.

Baumann said there truly is a special camaraderie between the closely connected organizations.

"The men seem to really enjoy having us around for different activities, just our presence. They make us feel welcome," she said.

"We donate money to them, too," Herrmann added.

The Auxiliary also sponsors Girls State, a summer leadership and citizenship program for high school juniors (the Post sponsors Boys State). Scholarships are provided for the weeklong experience, but few avail themselves of the opportunity compared to a generation ago.

The Auxiliaries across DuPage County used to gather in Hinsdale every June, where strawberry shortcake was always the featured treat. But dwindling membership brought that tradition to an end. Hermann said the Hinsdale Auxiliary has 21 senior members and eight junior members, down from its post-World War II peak in the triple digits.

"We have very few people that come to meetings. We try to keep going," Baumann said.

Congress recently changed the membership criteria for both the Legion and Auxiliary so that now any honorably discharged veteran can join.

"So that means that more wives, children, mothers and sisters can join now," Baumann said.

"Our people before us were so patriotic, and they instilled it in us," Baumann said. "And that's why we wanted to continue on and support all the veterans."