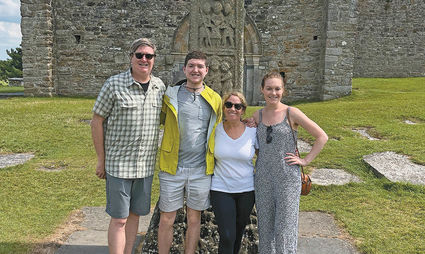 The Klinger family's most recent excursion involved a 10-day exploration of Ireland. The trip included the country's most visited attractions along with little-known spots recommended by Tony, their private tour guide, making for another memorable vacation for this well-traveled family. (photos provided)

The Klinger family's annual excursions to destinations far and wide began when Sylvia and Bob's children, David and Katharine, were very young.

"We started in the late '90s and we just kept going," Sylvia said.

And whether the destination is Ireland, Mexico or anywhere else, the overarching purpose of every Klinger family trip is the same - to disconnect from everyday life and to spend time connecting with each other.

"Once we get on that plane, we can breathe," Sylvia said.

This summer's destination was Ireland, a location chosen by David in celebration of his 22nd birthday. The choice was fine with Sylvia and Bob, who had visited Dublin many years ago and always wanted to return.

Travel is a big part of Sylvia's professional life as a consultant in the field of dietetics. She travels all over the world speaking at conferences and educating people. Whether it's for work or for play, travel is something Sylvia loves.

"I like adventure, and it's fun to get away," she said.

The Klinger family's 10-day Irish vacation was filled with castle tours and spectacular views. They visited a sheep farm, cooked their own dinners and did a lot of walking through towns and countrysides.

After four days in the heart of Dublin, they headed west toward Galway, an area that Sylvia called "stunningly beautiful."

Her favorite spot in Ireland was the Kylemore Abbey. Located a couple of hours outside of Galway on the west side of the country, Kylemore Abbey is a Benedictine monastery founded in 1920 by a group of nuns who fled Belgium in World War I. It's one of Ireland's most visited attractions, and according to Klinger, one of its most beautiful.

Despite her extensive experience as a traveler, Sylvia doesn't claim to know it all. And she's always open to trying something new. On this trip, she decided for the first time to hire a private tour guide. She said it's definitely something she will do again.

"There's so much to see," Sylvia said.

Their tour guide helped them to make the most of their limited time and showed them things they might not have found on their own. He knew things like what time to arrive to see certain views before they were compromised by fog. He found the best pubs, chocolate factories and castles, all the while sharing bits of history and inside stories about life in Ireland.

As is the case with her children, Sylvia said her love of travel started early. The daughter of missionaries, her family lived in Mexico for 10 years. As an adult, she returned to the country for two years when David and Katharine were young. Today, it remains a favorite destination for the entire Klinger family.

Next summer will take the Klingers to Italy. But this time, son David, who studied in Italy for a summer, will be the family's tour guide.

Between her work travels and her family trips, Sylvia has seen much of the world. But there is more to be explored. Patagonia remains on her list, along with a few other spots. 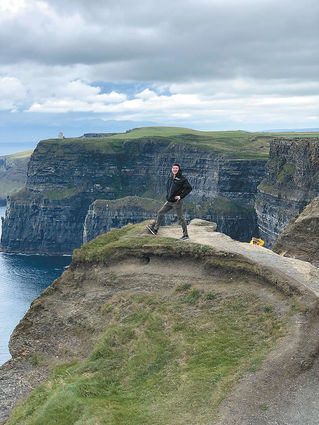 She hasn't seen it all, but she's seen enough of the world to have come to a few conclusions about the right way to travel. First, she always researches a destination before she departs. Second, she never tries to do it all. Instead, she takes the time to enjoy a few choice attractions and experiences.

As a dietitian, food is an important part of every travel experience.

And even though she's a vegetarian, Sylvia said a steak wasn't out of the question during her August trip to Argentina. She departed for Rio just two days after returning from her Ireland adventure.

"I love to experience what other cultures eat," she said.

One thing she experiences no matter where she goes is the kindness of people.

"Kindness is a universal language," Sylvia said, and one she looks forward to speaking when the people she meets from around the world come to visit the place she calls home.

"I love to show them the beauty of Chicago," she said.