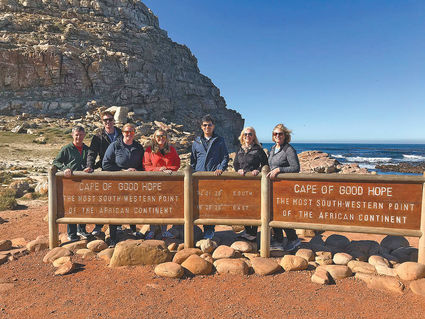 While temperatures were hitting all-time highs in Illinois, a group of teachers and administrators from Hinsdale District 181 were wearing winter coats to ward off a winter chill.

July is winter in South Africa, where a group from District 181 spent nearly two weeks of their summer break. Funded by the Casten Family Foundation and Tom and Judy Casten, the trip was an extension of a years-long cultural and professional exchange program between the teachers of Hinsdale and those in South Africa's LEAP schools.

Past summers have seen a group of educators from Hinsdale High School District 86 make the trip. This year, the opportunity was offered to the District 181 community. Amanda Campbell, a Spanish teacher at Hinsdale Middle School, said she knew right away that she wanted to be part of the group. She had been to South Africa before, but never with a focus on education.

The Coopers arrived a few days before the rest of the group to take in a safari and spend some time as tourists before embarking on the real purpose of the trip - to experience firsthand the work that's going on inside the country's LEAP schools.

Schools in the Langa Education Assistance Program, also known as LEAP Science and Math Schools, are secondary education schools located in three provinces in South Africa. The 181 group visited schools in two of those provinces - Gauteng, which is home to Johannesburg, and Western Cape, home of Cape Town.

Campbell said she expected to see a program still in development, but was surprised to find a group of teachers who were highly skilled and dedicated to their students.

"They were using techniques that we're still getting training on," Campbell said.

One technique that caught the attention of the 181 educators was a ritual called Life Enrichment Circles. The circles allow children a place to talk about their challenges, their struggles and to encourage one another. Robinson said talks already have begun about how the teachers and staff at District 181 schools can mimic what they saw in the LEAP schools to foster better relationships between teachers and students.

The visitors from Hinsdale enjoyed modern, comfortable accommodations on their trip. They paid a visit to an apartheid museum and enjoyed a safari, where they saw everything from zebras to hippos.

Perhaps most importantly, they spent time in the townships that LEAP students call home.

"It was important for us to see conditions kids come from," Robinson said.

Many children, Robinson said, live in homes without electricity or running water. Some have only one parent, while others have no parents at all.

Despite these challenges, and the great distance that some students must travel each day to get to school, Campbell and Robinson saw happy children who were succeeding in their studies. After a couple of days observing the schools, the teachers and their students, Robinson and Campbell arrived at a

"It's very important for a child to feel connected at school," Robinson said.

There was plenty of work involved on the trip, but there also was time to enjoy the beauty of the country, and to take in sights they would never see in Hinsdale.

"We saw a baboon walking down the street," Robinson said.

Some of the food they enjoyed was equally exotic.

"We had some of the best food I've ever had in my life," said Campbell, who tried cow hooves for the first time. Others gave kudu and springbok a try. Both are breeds of antelope.

"I ate a lot of animals that I had never tried before," Campbell said.

When the teachers from South Africa visit Hinsdale in September, they will see how things are done in the District 181 schools and how the children of Hinsdale live.

In the end, Robinson said she was pleased to see that students in Hinsdale are in many ways similar to their peers in South Africa. They all want to be successful, to learn, and to be accepted by their peers.

"Our schools are so different-looking," Campbell said. But students and teachers in both schools have the same goals in mind.

The weather was cold, but Campbell said the welcome they received from their fellow educators was nothing but warm.

"We didn't feel like guests. We felt like partners," said Campbell, who said she hopes the LEAP teachers feel the same when they visit Hinsdale.

Campbell said her middle school Spanish students will notice right away the effects of her summer vacation. She said it will show in how she interacts with her students, and how those students are encouraged to participate.

"I'm not exaggerating when I say it was life-changing," Campbell said.