Revord was 'the ultimate half-full guy'

Hinsdale husband, dad, coach found joy in family, friends and lending a hand to others 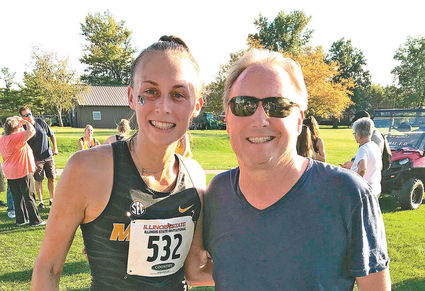 Chris Revord took delight in seeing his children follow in his running steps, including oldest daughter Reilly at the University of Missouri. Chris, who passed away at age 56 in February, valued hard work, having fun and people's stories, according to his wife Callie. "He got a lot of pleasure, as he got sicker, still being able to talk to people and connect with them," she said. (photo courtesy of the Revord family)

Super Bowl LIII was fast approaching, and Chris Revord was determined to be in his Hinsdale home, not a Hinsdale hospital bed. His battle with multiple myeloma was taking a heavy physical toll, but it couldn't touch his resolve.

"He wanted out so badly, and they didn't really want to let him out," said his wife, Callie, recalling a highly charged exchange between Chris and his doctor over the matter. "So they got him fixed up to come home. And that was actually the last time he got to come home."

Just a few weeks later, on Feb. 25, Christopher Joel Revord passed away. He was 56.

Callie and their four children - daughters Reilly and McKenna and sons Colby and Cooper - said that never-give-in attitude was a hallmark of Chris' approach to life, forged as the fourth of five brothers growing up in Orland Park. They were close, Callie said, sometimes too close, like when fighting for the last pieces of French toast or getting stuffed in a sleeping bag and left in the woods.

"He felt like that helped him be tougher and persevere," Callie said. "And be successful in running, too."

Chris discovered his love for running, particularly middle distance events, at Sandburg High School. As a senior he set school records in the 400-and 800-meter runs, marks that stood until just recently.

His talent earned him a spot with the University of Kentucky's track program. However, freshman Chris arrived on campus looking more like a shot putter than a runner, the family said. He ultimately hit his stride, winning a conference championship with his distance medley teammates.

"His years of college running were ones that he always told stories about," Callie said. "When he passed away, we heard from so many former teammates and coaches."

Running rubbed off on his kids. Eldest sibling Reilly was a cross country and track standout at Hinsdale Central and is now heading into her sophomore year competing for the University of Missouri.

"I know he was really proud of me that I chose to be in such a great conference," she quipped, with both Kentucky and Missouri in the Southeastern Conference.

Colby, a Central sophomore who runs for the Red Devils, said running instilled in his dad the value of teamwork.

"Whether he was talking to a boss or an office worker, he'd treat everybody the same," Colby said.

After college, he worked as a trader on the Chicago Board Options Exchange. In the early 1990s he took an opportunity to work in Tokyo, where he lived for about three years. When he repatriated to Chicago, it was running that led him into Callie's orbit - at least after he'd shed his Far East dormancy.

"He was very interesting and charismatic, and we started running together," she said. "His friend was like, 'He's a really good runner.' And he couldn't even make a mile! I was like, 'What is wrong with you?' "

True to form, Chris upped his game and won her heart. They married in 1998 and lived in Japan, where their three oldest children were born.

All four knew their dad as a coach, whether it was in AYSO soccer, Jodie Harrison basketball or flag football.

"He would just go out with me for, like, Indian food and Thai food," he said.

Colby noted that his dad had a taste for common pleasures, too, like Dairy Queen and popcorn.

"In college, he'd buy movie tickets just to go in and get the popcorn," he revealed.

Fellow Hinsdalean Ian Stevenson met Chris in 2007 when both had kids enrolled in Safety Village. An initial conversation about high-end watches evolved into a treasured friendship.

"It was one of the rare times when you met someone and you felt like you'd known him your whole life," Stevenson said. "He was easy to talk to and took an interest in people right away."

Chris' level of engagement with his children's activities was an inspiration, Stevenson remarked.

"Chris had a big impact on me because I saw how involved he was," he said. "Family came first with him."

The family would be on the receiving end of many of his spontaneous acts, like bringing home pets unannounced or a surprise new car ­- frequently to Callie's chagrin.

McKenna, a senior at Central, said he liked to provide happiness to others.

"He was very generous person. He'd always get us things with the best intentions," she reflected.

Stevenson noted Chris' passion for cooking, especially for guests, even after his illness had stolen his sense of taste.

"He couldn't really enjoy eating, but every night he would make a great dinner for the family, and that he would extend an invitation to me and my wife.

"He would say, 'It's the hard and the difficult that makes life special'," Stevenson continued. "He approached the illness like that."

Diagnosed about 12 years ago, Chris had off-and-on bouts with the illness. No one knew that Reilly's performance at the NCAA regionals and McKenna's at the IHSA state final in the fall would be the last races he'd see. They are comforted to be able to honor his legacy.

"Running is a part of our family, so that'll be a great way to make him proud and stay connected with him," Reilly said.