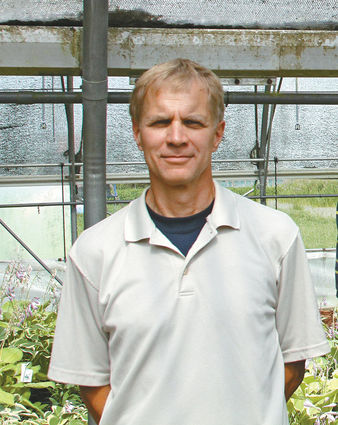 Hosta expert Mark Zilis, owner of A to Z Perennials Inc., will serve as auctioneer at Sunday's hosta auction and plant sale at The Community House. Among his most memorable experiences have involved visits to Japan, where hosta is indigenous and he would "go into the wild and explore for these different (hosta) species." (photo provided)

What's the story on hosta?

Homeowners looking to brighten up a shady garden spot or set off their front walkway might want to stop by The Community House Sunday for the Northern Illinois Hosta Society's annual auction and plant sale (see Page 20 for details).

Presiding over the 1:30 p.m. auction will be Mark Zilis, a leading expert on the plant as evidenced by his books, "The Hostapedia: An Encyclopedia of Hostas" and "Mark Zilis' Field Guide to Hostas." Zilis earned his master's in horticulture from the University of Illinois and went to work at a laboratory in Michigan that was mass-producing perennials.

"One of the plants they had me work on was hostas," he said. "Then I started attending meetings of the American Hosta Society and became personally interested."

Hosta plants came into their own during the 1980s, he explained, because of their diversity and versatility.

"Hostas offer season-long interest and have a variety of foliage colors and sizes. They can fit in to all different landscapes, whether in gardens, along driveways or around trees," he said.

"These beautiful, exclusive hostas could be grown by any home landscaper, so people became excited about them," Zilis remarked.

Hosta is native to northeast Asia, primarily Japan, and are especially valued for its shade-tolerant nature. Hosta lancifolia is most popular in the States, a staple of neighborhoods with their green, lance-shaped leaves that form into a mounded shape and lavender flowers atop their scapes.

"You might start out with three of four, and in five years you might have 100," he said.

Hosta also can be attractive to rabbits and other herbivores, especially plants with fragrant flowers. Fencing is the only way to fully protect them, he said, but the more diligent can try repellent spray.

"You have to spray almost every day. If you get a little bit of rain, it washes out and you have spray again," he said, while noting their heartiness is advantageous. "They're not very high maintenance for the average landscaper."

The array, from the giant Empress Wu variety to the container-size Blue Mouse Ears, fuels enthusiasts. Zilis suggested the large-leafed, bright green Sum and Substance is a suburban favorite.

"As I bike through different communities I see Sum and Substance planted, it seems, like everywhere," he said. "There's also been a trend to mini-sized hostas. Everybody has their own view on what they like."

In northern Illinois, the majority of hosta bloom for about three weeks between late June and mid-August. "It's a lot of fun for people to grow all these different kinds. They might have a whole mini-collection in their garden," Zilis said.

The most coveted hosta types can fetch upwards of $5,000 at national auctions. At the local level they generally go for between $10 and $50, but Zilis sees value in the investment.

"I'm always impressed by the unusual types of hostas that people bring to the auction," he said. "It's always a lot of fun."