Expanding craft breweries get innovative with styles for customers

Series: Brewing in the burbs | Story 3 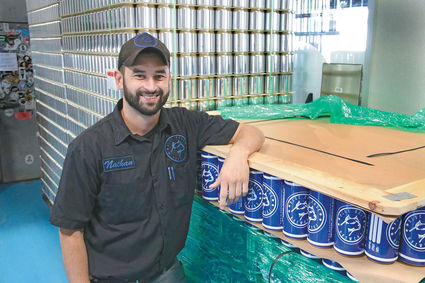 Blue Nose Brewery co-founder Nate Garcia and his team try to manage as much of the operation in-house as possible, including designing the cans for their packaged beer and hand painting the wooden tap menu boards above the bar. (Jim Slonoff photos)

The final installment of our series on Hinsdale-area microbreweries ventures eastward to explore what's on tap at Blue Nose Brewery, BuckleDown Brewing and Imperial Oak Brewing.

And don't forget - tomorrow is International Beer Day, the perfect occasion to pour a pint of something new. There are certainly a lot more crafters and varieties available within just a short drive than ever before. Perhaps one of the nine breweries we've profiled in this series has the brew for you. Cheers!

Blue Nose Brewery co-founder Nate Garcia envisioned opening a tap room in Chicago, catering primarily to the millenials who have helped ignite the

But when lease rates proved prohibitive, they set up shop in Justice before moving into their Hodgkins digs in 2015. And that has meant a much different mix of folks bellying up to the bar.

"Most of our customers in this area are families and 35 plus," Garcia said, refuting the notion of an age gap when it comes to microbrews. "I see more 35 plus than I see 21 to 35."

A large sign on the facade reading "BREWERY" leaves no ambiguity about the nature of the operation inside. Above the bar, Garcia's handpainted wooden tap menu boards artfully display the day's offerings for patrons. He and business partner Jordan Isenberg poured the concrete bar counter themselves, and they also create the graphics for their cans.

"I made a joke on one (online) post that we even mine our aluminum ore," he said with a laugh.

Starting with one 10-barrel unjacketed fermenter, Blue Nose now has several 10- and 20-barrel units along with its own canning line.

"That's pretty cool to see that growth happen," Garcia said. "We're proud to be part of that."

The brewery also takes pride in its inventive "kettle sour" beers, which is an acquired taste for some.

"Not a lot of places do that kind of thing," Garcia remarked, saying three sips are needed to acclimate. "Unlike wild sours, it's a lot more controlled, and we can be confident in our same flavor profile over and over again," he said.

Getting their beers into bars remains a challenge. But having the tap room has been the perfect way to reach customers directly.

"This area is amazing and people have been checking us out," he said. "We really love it here."

The offbeat charm of craft breweries can be enhanced by the off-the-beaten-path locations they inhabit. Take an old former auto repair garage in the middle of a Lyons industrial corridor, for example. To friends Sean Mahoney and Ike Orcutt, it was just the kind of raw space they wanted to house the refined creations of their BuckleDown Brewing start-up in 2012.

Mahoney said they had two barometers of success.

"One was to have somebody to try a beer a second time because they liked it. And the other was to recommend it to a friend," he articulated.

Clearly they've hit their marks, growing each year as they approach the brewery's seven-year anniversary and the limits of the site.

"Right now it's perfect for us," Mahoney related, saying they currently produce about 5,000 barrels with capacity for up to 9,000. "But the tap room is kind of small, relatively speaking, and parking's not so great."

Mahoney and Orcutt were home-brewing enthusiasts when they met, with Orcutt the more accomplished of the two.

"He had been winning awards, and he was a (beer) judge," Mahoney said.

They opened their doors with three beers on tap and few other suburban rivals. With the rise in the industry since then, Mahoney questioned whether he'd take the same chance today. He's grateful they were able to link up with a distributor early on to get their beers on shelves across the state.

"We're just lucky to have a bit of a foundation and a customer base," he said. "It's crazy how many breweries are happening right now."

And the rise of enthusiasm for craft beers helps quench complacency and draw in newbies. "I think that it creates a more savvy customer, so you have to make sure that the beer is quality and consistent." Mahoney said. "It's like any good food: if it's nuanced and balanced, you can convert some people."

"What is it that makes everybody from that light, macro-beer, anti-craft scene tag onto that beer?" Hamilton posed rhetorically. "It's twice as strong and super-hoppy. I don't know - they go for it."

The microbrewery has been making fans since 2014 at its tap room and facility tucked between Archer Avenue and the Cal-Sag Channel in Willow Springs village center. Hamilton and his partners, Brett Semenske and Chris DiBraccio, initially figured the Metra Heritage Corridor station across the street would generate a lot traffic. But another mode of transport has helped propel the business.

"Being so close to the paved corridor (cycling) trail, you get the everyday rider to the hard-core distance biker," he said, adding that forest preserve mountain bike trails are also nearby. "We get those guys coming in here, knocking mud off their shoes for a beer."

Hamilton said the tap room usually has about 18 beers on tap, with regular changes to keep enthusiasts on their toes.

"We don't brew really big batches. We just brew a lot of different stuff, continually rotating through styles and versions of those styles," he remarked.

The business doubled its footprint about two years ago when it took over the space next door. "We can make more beer, and different kids of beer and have more space for you to come and drink it," Hamilton said.

A front patio affords an open-air spot for patrons to savor their summertime selections, often light lagers and Hefeweizen, before the heavier autumn brews take over, he said. Imperial Oak also serves wine and cocktails for those less inclined toward beer.

"It's nice to have a good variety of food every time you come in, and the beer is always different, too," Hamilton said. "So it's easy to make everybody happy." 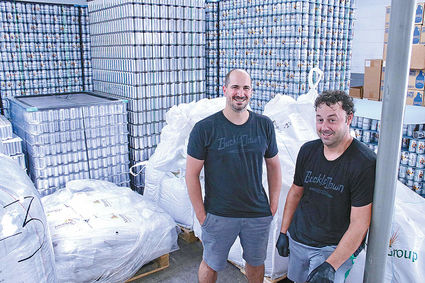 At BuckleDown Brewing in Lyons, co-founders Sean Mahoney and Ike Orcutt have expanded their original stock of three beers in the last six years - and accumulated scores of devotees in the process. "The tap room is a good way to have people try beers, see what we're all about," Mahoney said.