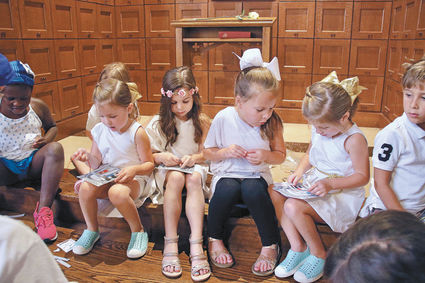 Grace Episcopal Church uses crafts, stories, games and songs to share the importance of sharing God's love. Camden Murray builds a prayer box that will hold handwritten prayer intentions. Isabella Gandy and Molly Goss make paper in an exploration of what communication was like before computers and Twitter. (Jim Slonoff photos)

To 3-year-old Alex Tims, it's an introduction to what life will be like when he starts preschool later this year. For Katie Crotty's four children, it's a chance to enjoy a common activity near the end of a busy summer. And for Crotty herself, it's an opportunity to enjoy coffee with a friend, knowing all four children are happy and cared for.

But program directors Meghan Mannor and Julie Pierce had just one primary goal in mind when they planned the church's four-day event - to teach children that God loves everyone and wants us to share that love with others.

"We want to share God's love with everyone," she said. That's why although the program is meant for no more than 100 children, there may be just a few more on this summer's VBS roster.

Grace Episcopal, which offers a full summer of activities for children, has finished things off with vacation Bible school for the last several years. Mannor said the faith-based program attracted about 40 children the first year but quickly grew in popularity.

Now, the 100-plus attendees include children as young as 3 and as old as 12, with the older students serving as junior counselors. This chance to learn responsibility and leadership skills is a first step toward Grace Episcopal's mission-based program for high school students, said Mannor, who serves as the church's year-round formation director.

Children in the four-day camp meet from 9 to noon each day and spend much of their time in groups of kids their own age. This summer's program adopts the theme of ancient Greece, so those age groups are referred to as oikos - the Greek word for "family" or "house." Each oikos is assigned an identifying color and named after an ancient Greek city.

The subtle lessons in history, geography and even science that are weaved into the week's programming are not by accident. On the first day of the program, children spent time learning about how water was moved from place to place in ancient Greece.

"They loved the aqueducts," Mannor said, referring to the marble runs they used to simulate networks of pipes, ditches and tunnels.

Day 1 also included a stop at the glass market, where children made sun catchers. The daily craft projects are a favorite of Crotty's daughters, Olivia, 8, and Bryn, 6.

Hinsdale resident Crotty said her kids have a lot of fun at vacation Bible school, but along with the crafts, the songs and the games, the program's message of God's love is getting through.

"I hear them talking about the day's story and they sing the songs," she said. "It really carries over into our week."

Each day at begins with a Bible story that sets the tone for the rest of the day's activities, which include songs, games and crafts such as pottery and friendship bracelets - a tangible way of sharing the love that is the week's primary lesson.

Even snack time is a chance to learn, Mannor said. As the children enjoyed their mid-morning meal on Monday, they were encouraged to share stories of a time when they experienced love and kindness. They also talked about how messages were sent long ago, before the conveniences of cell phones and social media.

Sarah Tims of Hinsdale said vacation Bible school at Grace Episcopal holds something valuable for each of her five sons. Three are attending this year but all have participated in the past.

While 10-year-old Walter learns responsibility and leadership as a junior counselor, 5-year-old Dean enjoys meeting other children his age from other parts of town and other nearby schools. And 3-year-old Alex is getting a taste of what it's like to spend a few hours without Mom by his side.

"They all love it," Sims said.