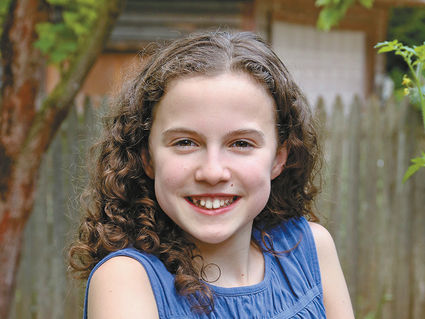 Russell, 11, is one of two young actors portraying the titular character in BAMtheatre's production of "Matilda" Aug. 2-4 at Nazareth Academy in LaGrange Park (see Page 24 for details). The musical is based on Roald Dahl's beloved novel about a highly precocious girl equipped with telekinetic abilities, which emerge in confrontations with her contemptible parents, Mr. & Mrs. Wormwood, and her oppressive headmistress, Miss Trunchbull.

"She doesn't like anybody, but especially Matilda," Russell said of the story's villain.

Thankfully Matilda finds an ally and advocate in her teacher, Miss Honey, and works to thwart the wrongdoers with hilarious results.

"She can stand up to people who are a lot more powerful than her," Russell said. "She stands up to Miss Trunchbull even though all the other students are scared of her."

Russell got her start in the world of acting at age 4. But it was during her turn as a young Cosette in BAM's staging of "Les Miserables" when she was 7 that theater became a serious pursuit.

"That was a really special time. Everyone there was a lot older than me, and I really enjoyed having those role models," she reflected. "Seeing them made me want to be more like them when I get older."

Russell was well-versed on the Matilda story, having both read the book and watched the 1996 film adaptation. Memorizing the sheer volume of lines for her character presented a challenge, she said, as did trying to portray a girl with uncommon traits.

The experience has helped her mature in her performance and her resiliency.

"If I mess up, sometimes it can be hard to keep going. But you have to do that," she said.

Thinking back to auditions, Russell is amazed at the evolution of the production over the past few months

"Just getting some type of reaction from an audience, it's a good feeling," she said.

Russell has enjoyed using her faux superpowers and said those talents could certainly come in handy in real life.

"I would either want the power to turn invisible, or have (Matilda's) power where you can move things with your mind," she said

She's also become mindful of the true ability she possesses to impact her juniors in the cast, just as she was influenced by her elders as a stage neophyte.

"I used to be a little tiny looking up to people who were 10 and 11, and now I'm that person that little kids look up to," she said.