Portrait paints picture of family's past

Research uncovers more about relatives than their relationship to Abraham Lincoln 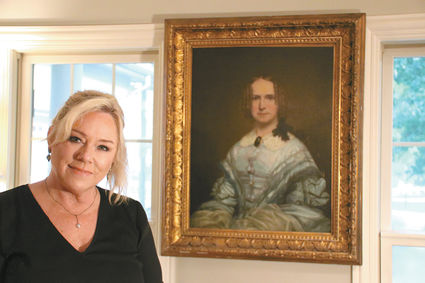 Still in its original frame,a portrait of Ginger White's great-great-grandmother, Maryann Dearborn Scammon, hangs in White's Hinsdale living room. The por-trait, by American painter George Healy, sat forgot-ten for nearly a century in the attic of a Wisconsin home. Healy is known for portraits he painted of Abraham Lincoln, two of which remain on display in the White House. (Jim Slonoff photo)

A long-forgotten painting provided Hinsdale resident Ginger White with far more than a picture to adorn her living room wall. It led to the discovery of her family’s very storied history.

Years ago, and nearly a half century after one of White’s relatives moved out of his Shorewood, Wis., home, White’s mother was contacted by the home’s owner, who had discovered possessions belonging to J.Y. Scammon, White’s great-great-grandfather, in the home’s attic. Among the items was a torn portrait of a woman and a stack of old letters ­— letters written to Scammon by his friend and law partner, Abraham Lincoln.

White said the family knew of Scammon’s relationship with Lincoln, including his role as a pallbearer at the president’s funeral, prior to the attic discovery.

But the items in that attic led White, her mother and other members of the family on a quest to learn more about their ancestors, beginning with the woman in the long-forgotten portrait.

A curator at the Milwaukee Art Museum identified the painting as the work of portrait artist George Healy, creator of two portraits of Lincoln that still adorn the walls of the White House. Further investigation revealed that the woman portrayed in the portrait was Maryann Dearborn Scammon, wife of J.Y. Scammon and White’s great-great-grandmother.

White’s family discovered that along with being a good friend and law partner to the future president, Scammon was a prominent businessman. He started Chicago’s first newspaper and donated the land on which the University of Chicago was built. He also is credited with starting the Chicago History Museum, once known as the Chicago Historical Society. That’s where his portrait, also by Healy, hangs today, in the office of president Gary Johnson.

After his wife’s death, Scammon gave the portrait to his daughter. As the family will tell it, Lincoln’s son, Tad, rescued the painting from Scammon’s daughter’s home as the fire approached.

After the rescue, the painting would spend much of the next century in that attic in Wisconsin. But after being restored by the same craftsman who cares for the portraits in Washington, D.C., it finally has found a proper home, and the appreciation it deserves, on the wall of White’s home.

Despite the painting’s age and the notability of its creator, White said her treasured portrait isn’t exceptionally valuable. If she ever parts with the portrait, she plans to offer it to the Dearborn Observatory at Northwestern University. Named after Maryann Dearborn, it still uses a telescope purchased and donated by Scammon.

The letters penned between Lincoln and her great-great-grandfather are now stored in a vault at the Lincoln museum in Springfield — a far safer place than the attic of an old house in Wisconsin.