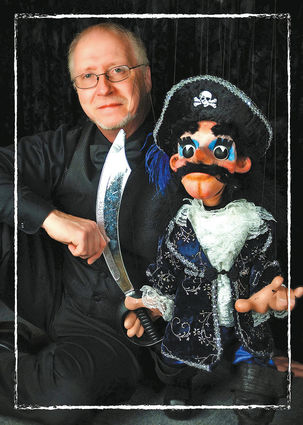 Dave Herzog said puppeteering has been rewarding career path. "I always liked to be on stage. I did this to make people happy, and when the kids are happy, I'm happy." (photo provided)

Puppeteers like Dave Herzog work in full view of their audience. But that doesn’t mean he’s always seen.

“I remember one boy saying to me after a show, ‘How did you make yourself invisible during the show?’ ” Herzog related with a laugh.

The entertainer and his marionette magic will appear at the Hinsdale Public Library at 6:30 p.m. Monday, July 29 (see Page 23 for details).

Now in his fifth decade of dazzling young and old with his cast of handcrafted characters, Herzog said he was one of those mesmerized kids watching a puppet show in second grade. The experience would go on to animate his livelihood.

“I wanted to learn how to do that, how to make puppets and perform with puppets,” Herzog said. “I started working in my 20s for a company that did shows for amusement parks up and down the east coast.”

The Chicago native returned to his home turf in the mid-1980s and keeps a full schedule with bookings at schools, day care centers, country clubs and more.

The most critical aspect of the trade is having engaging partners with which to share the stage. He currently has more than 200 puppets in use, all of which he has made from scratch. Inspiration for a new figure, he said, can strike at any moment.

“You have to come up with the idea first,” Herzog explained. “It might come from a piece of music I hear or something I see in a movie. It can be practically anything.”

The puppet’s use in the show must be considered in order to build in the necessary range of movement. Then he makes a mechanical drawing to guide his patterns for shaping the parts.

“There’s a lot of sanding,” he said of the wooden body sections. “The heads are hollow, and I sculpt them in clay to make plaster of paris molds. Most of the puppets have moving eyes and mouths.”

Personality springs to life in the finishing touches.

“You have to design the puppets’ wigs and clothes. I do all of that. I pattern and sew the clothes. You’re kind of one man

The process takes about a month from start to completion.

“It’s always a lot of fun when you have the finished puppet,” he said. “I’ve always got something on the workbench that I’m creating.”

Putting together the actual show is another time-consuming endeavor.

“I work for hours rehearsing and rehearsing with the puppets to get the movements to work with the music,” Herzog said.

Hinsdale library attendees will be treated to “Puppetpalooza,” a show featuring more than a dozen characters.

“It’s meant to be sort of an around-the-world circus,” said Herzog, offering a small foretaste of the act. “There’s a little German fellow in lederhosen who’s been strung to do various tricks with roller skating.”

“This is old-school entertainment. And it’s still effective today,” he said. “People still laugh at the same things.”