Shortly after her divorce, Julia Sweeney bought a little bungalow in Hollywood and imagined a wonderful life there - living alone, entertaining friends and spending afternoons listening to Tchaikovsky.

The former Saturday Night Live star, writer, director, actress and monologist proceeded to share about 30 minutes of "God Said Ha!" a show that debuted on Broadway in 1996 and later became a movie and a memoir.

Just as she was anticipating her life of independence, her brother, Mike, was diagnosed with Stage 4 non-Hodgkins lymphoma. He moved into her home and soon her parents, who lived in Spokane, followed.

"For the next 9 months they were all in my perfect little house built for one," she said.

She shared hilarious stories about the challenges of sleeping on the pull-out couch in the office in the backyard while her parents took over her house. Instead of Tchaikovsky, the Irish Rovers were blaring.

Then, in midst of all the chaos, she learned she had cervical cancer that had spread to her uterus and fallopian tubes and required an immediate hysterectomy. She said she considered not telling her family.

"But I didn't know how I was going to hide having a hysterectomy," she said.

So she told them, and they were devastated. But in a family that cared about making each other laugh, it wasn't long before her brother had a comeback.

"Mike immediately said, 'Oh, you just couldn't stand it, could you? I'll bet it was hard for you, being an actress, with me in the cancer spotlight,' " she recalled.

Mike was in a cycle where he would get worse and then a little better and then do it all over again.

Sweeney shared a bit more about Mike's death and her own cancer journey before concluding her reading. During the interview that followed with JourneyCare board member Elise Magers and her husband, former news anchor Ron Magers, she talked more about the importance of knowing loved ones' desires as they near the end of life. Since Mike died, she also has lost her father and her brother, Bill.

"In every one, no one could acknowledge what was happening and you couldn't even have any discussion like that," she said. "I thought it really robbed me and everyone of having much more meaningful experiences at the end of their lives than we had."

She told a story about one of her last afternoons with her brother, Bill. Instead of sharing memories of their lives and backpacking trip they took through Europe, they flipped through the available reading material.

"Because we were in this huge denial of what was happening, we sat and looked at magazines," she said.

She wondered if an Irish Catholic family 20 years younger than hers would be more open to end of life discussions.

"That's such raw stuff to talk about," she said. "That's intimate, raw stuff, which I think is hard for most people to talk about."

Since that time, Sweeney and her husband, Mike Blum, have put advanced directives in place. She said her biggest concern is living longer than she should.

"I really want to make sure that if I was incapacitated they would say, 'Pull the plug,' " she said.

She believes too many people - and their doctors - are focused on prolonging life when it really doesn't make sense. Her father-in-law had surgery and chemo after being diagnosed with slow-growing lung cancer at age 92.

"I see so many older people doing everything they can," she said, when they could be trying to spend their last few years living life instead of fighting death.

"I wish our society would develop a thing where that's an honorable thing to do," she said. 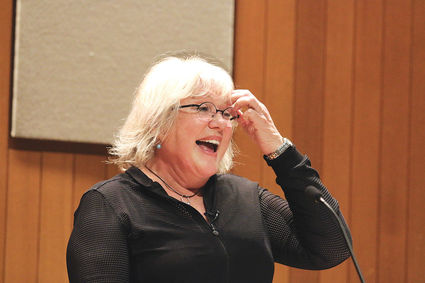 Comedian and author Julia Sweeney alternated between hysterical stories about her family and poignant messages about how to celebrate the end of life at the "Life is a Journey" event Tuesday night in Oak Brook. "I just see such a denial of death everywhere," she said. (Jim Slonoff photo)

She encouraged others to have conversations about how they want to die and to think in detail of 10 greatest times of their lives so they can recall them near the end.

She has decided to be buried at her family's plot in Spokane and has already written her epitaph: "The earth spit me out. Now it sucked me back in. All in all, it was a joy. Thanks for having me."

Sweeney's daughter, Mulan, has already warned her she's going to give all her stuff to Goodwill after she's gone.

For Sweeney and her family, humor will always be part of these conversations.